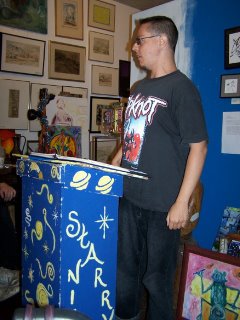 The Open Bark is Deb Pirestly's open mike event that occurs every Saturday night at the Out of the Blue Art Gallery on 106 Prospect Street in Cambridge, starting at 8:00.

Priestly has recently teamed with Mike Amado (pictured above, from his October 2nd Stone Soup performance) in an effort to start including regular features at the Open Bark.

A seperate web site and email adress for the Open Bark will be announced soon. Those interested in featuring for the Open Bark can send an email to stonesouppoetry@yahoo.com for the time being.
Posted by Chad Parenteau at 1:56 PM