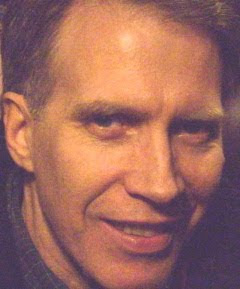 Stone Soup Poetry meets from 8-10 p.m. every Monday at the Out of The Blue Art Gallery at 106 Prospect Street with an open mike sign-up at 7:30 p.m. On September 6th, poet and instructor Tom Daley makes one of his all-too infrequent visits to the venue--a night not to be missed.

Tom Daley serves on the faculty of the Online School of Poetry (http://onlineschoolofpoetry.org/) and teaches poetry and memoir writing in the greater Boston area. His work has appeared or is forthcoming in Harvard Review, Fence, Barrow Street, Diagram, Rio Grande Review and elsewhere. He is the author of a play, Every Broom and Bridget—Emily Dickinson and Her Servants, which he has adapted into a one-man show.
Posted by Chad Parenteau at 3:49 AM

Stone Soup Poetry meets from 8-10 p.m. every Monday at the Out of The Blue Art Gallery at 106 Prospect Street with an open mike sign-up at 7:30 p.m. On August 30th, past Stone Soup visitor Susan Chandel returns to the venue.] to promote her new collection.

Susan Chandel was first published in Seventeen Magazine in July 1974. Writing and drawing have been her passions since she was a young child growing up on Cape Cod. Her work has also appeared in The Café Review and the online collection iPeace:15,000 stories. Susan received a B.A. in English from the University of Massachusetts, and promptly traveled North America in search of a reason not to settle down. She returned to New England, raised three children and has worked as an advocate in mental health, rape crisis and domestic violence for over 20 years.
Currently, Susan lives with her ornery Chihuahua Cisco in her tree house in mid coast Maine.
Posted by Chad Parenteau at 3:45 AM

Stone Soup Poetry meets from 8-10 p.m. every Monday at the Out of The Blue Art Gallery at 106 Prospect Street with an open mike sign-up at 7:30 p.m. On August 23rd, Stone Soup celebrates Biker Poetry Month with the return of The Highway Poets. 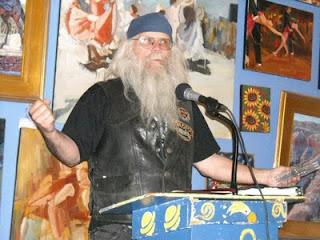 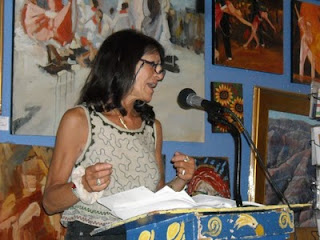 Marc D. Goldfinger has been published by Ibbetson Street Press, The Aurorean, Pegasus, The Boston Poet, Clamor magazine, Earth First! and the Crooked River Press among others. He is currently the poetry editor of Spare Change News, a paper put out for the benefit of homeless people. He is a counselor for people with Substance Use Disorders and some of his work has been used to augment courses at the University of Massachusetts in Boston. His newest works include Essays On Major Mental Illness with a Co-Occurring Substance Use Disorder or What Came First: The Chicken or The White Horse.

Posted by Chad Parenteau at 2:50 AM 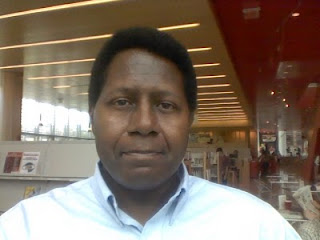 Stone Soup Poetry meets from 8-10 p.m. every Monday at the Out of The Blue Art Gallery at 106 Prospect Street with an open mike sign-up at 7:30 p.m. On August 16th, we are visited by poet and playwright Brian Young.

Born in Atlanta, Ga., he gained a B. A. in Philosophy from the University of Georgia, Athens, Ga.; he also, Minored in Drama: studied Acting with the Alliance Theatre Company’s Theatre School of Atlanta, Ga. – also with Jean Shelton’s Actors Lab in San Francisco, CA. ; he has engaged in varied, limited productions, from community theatre in Atlanta, Ga. - to progressive modern-experimental theatre in Los Los Angeles, CA.

He developed and engaged in special partial, limited performances of his own first play, On The Frontier: The President and Mrs. Lincoln, presented tonight (copyright 2004), along with full readings of the play: while, also, participating in extensive poetry readings in group sessions - all in the bay area, San Francisco & Berkeley, CA.

Spending the greater portion of his years and life in Los Angeles, CA., he was formerly an Asst. Calendar/Staff Editor with the LA. WEEKLY, (some years ago); he is a poet with limited publication in group anthologies. From his poetry - came his first play on President Kennedy. He now lives in Boston, MA.; and has just launched a new Blog: wwwyoungexpedition.blogspot.com
Posted by Chad Parenteau at 4:05 PM