Stone Soup Poetry meets from 8-10 p.m. every Monday at the Out of The Blue Art Gallery (located on 106 Prospect Street in Cambridge) with an open mike sign-up at 7:30 p.m. On August 3rd, The Highway poets make their annual visit to Stone Soup, celebrating Biker Poetry Month and the first anniversary of the publication of Rubber Side Down, the biker poet anthology. Below is only partial list of participants, as there are always announced and unannounced readers when the Highway Poets visit. 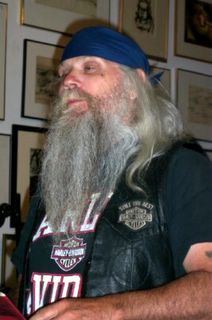 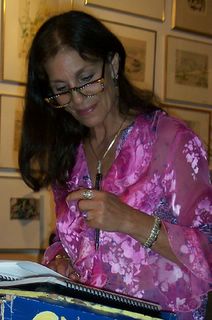 Gypsypashn publishes in print and on the web regularly, she is well-known for her monthly column in New England's Motorcyclist Post. She and Colorado's Gypsyrose produce 'Biker Bits,' a daily Biker Rights e-zine. In 2004, Gypsypashn published A Samplng of Soul, a collection of poetry.

Purchase the Rubber Side Down anthology. 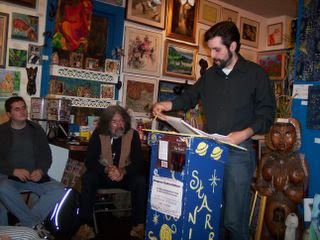 Stone Soup Poetry meets from 8-10 p.m. every Monday at the Out of The Blue Art Gallery at 106 Prospect Street with an open mike sign-up at 7:30 p.m. On July 27th, the reading series welcomes back popular open miker Christopher Kain.

Christopher Kain: "i found poetry at the Haymarket Cafe in Northampton while i was a junior at UMass in Amherst. after college, i moved to Cincinnati & read at Borders Books & Music as well as in the open folk mic at the Cincinnati Y. i moved to DC where i read at the Live Poets Society, took classes at the Writer's Center in Bethesda, MD, & was anthologized in the Federal Poet. due to dwindling funds, i returned home to the parents in CT & read at various open folk mics there. while working for Borders, i founded a six-month poetry workshop in Manchester, CT. i moved to Boston in 2002 & the first place i read was at the Out of the Blue Gallery. i became a regular at the Cantab for the next seven years & featured in various places in the Boston area. i finished a book of my poetry organized by the times of day called homefront. i contribute to a blog of writers determined to write 365 poems in 365 days. i am almost at poem #180 & am at least a month behind. i'm currently working on a book of poems titled Twentieth Century Limited, which will have 100 poems for the 100 years of the twentieth century. i can still be found giving my three minutes of work at the Cantab Lounge on Wednesday nights."

Click here for a poem by Christopher Kain from the latest Spoonful.
Posted by Chad Parenteau at 9:51 PM 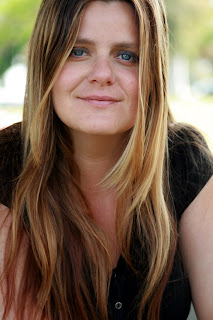 Stone Soup Poetry meets from 8-10 p.m. every Monday at the Out of The Blue Art Gallery at 106 Prospect Street with an open mike sign-up at 7:30 p.m. On July 20th, Stone Soup will be visited by well-traveled poetLisaAnn LoBasso.

Refusing to characterize her poetic style as either academic or performance, LisaAnn LoBasso considers herself most at home among artists. With over 20 years experience, she has produced countless readings and collaborative arts events, such as the Up Close, Let Loose Traveling Poets’ Reading Series, and Operation Soapbox, while still racking up her own credentials, including Poet Ambassador of Kern County in California, as well as appearances at venues and universities from West Coast to East. LisaAnn’s work has been lauded as both dynamic and boundary-breaking; dubbed a poetry minstrel by Las Vegas City Life Weekly, she has featured with diverse and noteworthy poets, such as Nicholas Roerich Prize winner Lee McCarthy, California Poet Laureate Al Young, and Paterson Award Winner Indran Amirthanayagam.

Click here for a sample of her work.
Posted by Chad Parenteau at 2:07 AM

Stone Soup Poetry meets from 8-10 p.m. every Monday at the Out of The Blue Art Gallery at 106 Prospect Street with an open mike sign-up at 7:30 p.m. On July 13th, we welcome a double feature of poets and friends Dan Provost and Erin Reardon.

Dan Provost's poetry has been published throughout the small press for years. He has two chapbooks coming out this summer; The Southside of Agony published by New Polish Beat and a flipbook with the talented Aleathia Drehmer published by Tainted Coffee Press. He lives in Worcester where he is a college administrator at Assumption and an Assistant Football Coach at Millbury High School. 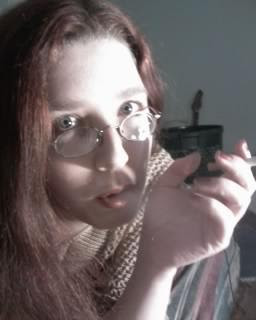 Erin Reardon is a poet. She has been published at Silenced Press, Hecale, the Neo-Lampshadian Outpost, Spoonful Quarterly, Parasitic, Zygote in My Coffee, Words Dance, Beat the Dust, Heroin Love Songs, Epic Rites and Gutter Eloquence Magazine. She has featured twice at Stone Soup, Boston’s Longest Running Poetry Series and has performed several open mics there and at The Cantab and The Lizard Lounge. She currently resides in Somerville, MA where she is often spotted bringing the funk.

Posted by Chad Parenteau at 1:11 AM