Tim Gager features tonight.
Posted by Chad Parenteau at 2:11 AM

Posted by Chad Parenteau at 2:05 AM

Stone Soup Poetry meets from 8-10 p.m. every Monday at the Out of The Blue Art Gallery at 106 Prospect Street with an open mike sign-up at 7:30 p.m. Closing off National Poetry Month on the 30th of April will be poet and fiction writer Steven Manchester, who will be reading selections from his new book Pressed Pennies, a novel which incorporates the author's own verse.

The father of two sons and one beautiful, little girl, Steven Manchester is the published author of The Unexpected Storm: The Gulf War Legacy, Jacob Evans, A Father’s Love, Warp II and At The Stroke of Midnight, as well as several books under the pseudonym, Steven Herberts. His work has been showcased in such national literary journals as Taproot Literary Review, American Poetry Review and Fresh! Literary Magazine.

Manchester is an accomplished speaker, and currently teaches the popular workshop, "Write A Book, Get Published & Promote Your Work." Three of his screenplays have also been produced as films. When not spending time with his children, writing, teaching, or promoting his published books/films, this Massachusetts author speaks publicly to troubled children through the “Straight Ahead” Program.
Posted by Chad Parenteau at 1:14 AM 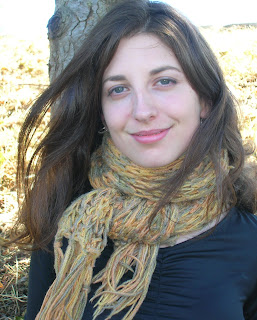 Stone Soup Poetry meets from 8-10 p.m. every Monday at the Out of The Blue Art Gallery at 106 Prospect Street with an open mike sign-up at 7:30 p.m. On April 23rd, performanc poet Barbara Adler selects Stone Soup as one of the stops on her tour.

In 2002, Barbara Adler was the youngest performer to win a spot on the acclaimed Vancouver Poetry Slam team, at the age of 18. Now a four-time member, Barbara has toured the world performing poetry both as a solo performer, and as a member of the spoken-word music band, The Fugitives. Known for her ability to mix intellectual poetics with entertaining observations about the quirkier moments of everyday life, Barbara has collaborated with composers, dancers, filmmakers and theater artists, creating “smart, funny, and often deeply moving poetry around questions of history, identity, and self-image” (Georgia Straight). This Spring, she finished a double major in Art and Culture Studies and Fine and Performing Arts at Simon Fraser University. Her new CD is titled “Flusterblush.”

Click here for Barbara Adler's MySpace page.
Posted by Chad Parenteau at 1:04 AM 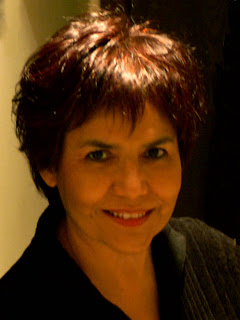 Stone Soup Poetry meets from 8-10 p.m. every Monday at the Out of The Blue Art Gallery at 106 Prospect Street with an open mike sign-up at 7:30 p.m. On April 16th, Stone Soup welcomes the return of poet, playwright, performer, editor and former regular Diana Sáenz.

Sáenz is on the board of directors of Harris Gardner’s Boston National Poetry Festival. She designed the Tapestry of Voices website, as well as runs the bostonpoet.com website since 2000. She has featured most recently at the Kerouac Festival in October 2006, Squawk, Jeff Robinson’s Poetry Jazz, Lowell University, Nashua’s Poet’s Corner, Stone Soup Poets, and many other venues.

Visit bostonpoet.com
Posted by Chad Parenteau at 12:57 AM 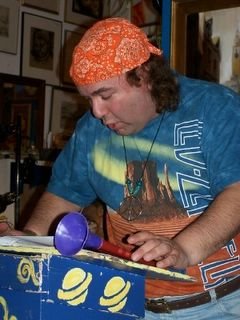 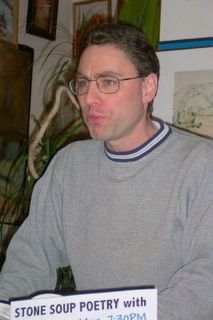 Stone Soup Poetry meets from 8-10 p.m. every Monday at the Out of The Blue Art Gallery at 106 Prospect Street with an open mike sign-up at 7:30 p.m. On April 9th, Stone Soup will feature the return of Stone Soup's favorite open mike gadfly, Lee Letif and his opener, Chris Robbins. Because this sure to be an extension of Letif's usual open mike performances, the April 9th show will likely not be viewable on public access and therefore is best viewed live.

Lee Letif has been a regular contribution to the Stone Soup open mike since 1991. He's the author of several chapbooks, including Unpatriotic Flags and Abominating White Houses, Reckless Paella and Defecating Republicans, and Ultrasonic Amplifiers and Marshall Amps/Genital Wart Puking Rednecks.

Chris Robbins was born in Boston, MA, in 1965, not that this crap is actually important. He graduated Whitman-Hanson High in 1984, earning a B. S. degree ('cause, fact it people, that's all a high school diploma is really worth these days). In 1993, after writing poetry and otherwise wasting ink for nine years, Chris wrote a bunch of fixed form poems and, attempting to emulate one of his favorite classic rock bands, Jethro Tull, self-published a chapbook called Bard's Ambition. Now, 14 years later, he's at it again, this time with a chapbook of love and human equality poetry, appropriately called Love Among Equals.
Posted by Chad Parenteau at 12:23 AM

Stone Soup Poetry meets from 8-10 p.m. every Monday at the Out of The Blue Art Gallery at 106 Prospect Street with an open mike sign-up at 7:30 p.m. On the first Monday of February, Stone Soup has the pleasure of welcoming Charles Coe, who will be the first performer for our celebration of National Poetry Month.

Charles Coe is the winner of an Artist Fellowship in Poetry from the Massachusetts Cultural Council, and now coordinates the Council's literature and music grant programs. His work has appeared in numerous literary reviews and magazines. A volume of his poetry, Picnic on the Moon, has been published by Leapfrog Press. Charles also appears on two spoken-word CDs: Get Ready for Boston, a collection of stories and songs about Boston neighborhoods, and on One Side of the River, an anthology of Cambridge and Somerville poets.

His poems have been set to music by composers Julia Carey, Beth Denisch and Robert Moran. In addition to poetry, Charles writes feature articles and book reviews that have appeared in publications such as Harvard Magazine, The Boston Phoenix, and The Boston Globe. Charles is also co-chair of the Boston Chapter of the National Writers Union--a labor union for freelance writers.


Inventory
For the poets of Norfolk Correctional Institution

As a child, I kept track
of certain things: crack in the sidewalk
between the bus stop and school,
names of streets between the bridge
and our family's house,
toy soldiers lined up on a shelf.

Now the list of things I've lost, or forgotten,
or thrown away, at times seems longer
than the list of what remains; this feeling
often visits uninvited, late at night,
when every breath is a footstep
measuring the miles till dawn.

But this morning, when I walked across the yard,
the sun suddenly shoved through the clouds
to warm my face,
and later I was surprised by a small kindness
from an unexpected source. This life
is not the one I would have chosen;
but I will try to keep an open hand
for the gifts is spreads each day across my path,
like Easter eggs hidden in the grass.