Stone Soup Poetry meets from 8-10 p.m. every Monday at the Out of The Blue Art Gallery at 106 Prospect Street with an open mike sign-up at 7:30 p.m.  On August 5th, we are pleased to have Marc Goldfinger back at Stone Soup for his first full-length feature in years.

Marc Goldfinger has been published by the Ibbetson Street, the Aurorean, Liberation Poetry Collective, Pegasus, the Boston Poet, the Crooked River Press, EarthFirst! magazine, Clamor, The New Renaissance, User’s News, Poiesis and many others. He is currently the poetry editor and a regular columnist for the Spare Change News, a paper put out for the benefit of homeless people. He is a counselor for people with Substance Use Disorders. He is a member of The Road Scribes Of America. Marc has 3 books for sale at www.Smashwords.com and can also be found at www.sparechangenews.net/. He has performed at Occupy Boston more than once. He also has his own website at http://marcdgoldfinger.outlawpoetry.com/ where he also has books and a CD for sale.

Posted by Chad Parenteau at 6:15 AM 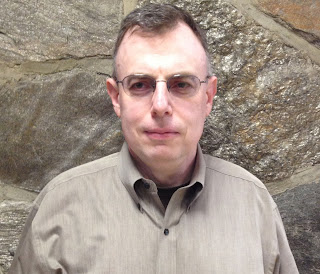 Stone Soup Poetry meets from 8-10 p.m. every Monday at the Out of The Blue Art Gallery at 106 Prospect Street with an open mike sign-up at 7:30 p.m.  On July 29th, we welcome Wayne L. Miller to our home state and our venue.

Wayne L. Miller was born and raised in Brooklyn, NY. He reads at various venues in his home state of New Jersey and in New York. During the day, he wrestles with computer software. Sometimes, the software wins. Living in London on and off for six years made him a fan of HobNobs. Many of his poems can be found on his blog, BrooklynBloke.com

Posted by Chad Parenteau at 8:43 PM 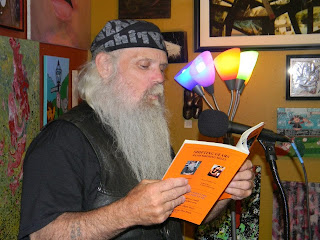 Stone Soup Poetry meets from 8-10 p.m. every Monday at the Out of The Blue Art Gallery at 106 Prospect Street with an open mike sign-up at 7:30 p.m. On July22nd, biker poetry is once again added to our summer schedule with the return of K. Peddlar Bridges and the debut of Lisa Golda-Shields.

K. Peddlar Bridges is a prolific and persistent talent, one of the founders of the Biker Poetry movement. Peddlar is a well recognized, unique voice currently living on the North Shore of Boston. The Roadpoet Fortnight is his brain child, and will debut in July, 2013. In addition to being a regular at many poetry venues, he also hosts RoadPoet Café, on ICAM, (the Ipswich Cable access station) and is working on a new collection of works about the poetic heritage of Gloucester.

Lisa Golda-Shields is a poet, editor, and advocate for special needs children, now living in Ipswich. Her first collection of poetry and prose The Infinite Charm of Firefly Glow is currently housed in the Library of Congress. She works with kids and their families, in between various collective and individual literary projects. She is also working on her first novel, and a chapbook of work to be completed in the fall of 2013.

Posted by Chad Parenteau at 7:30 AM

Stone Soup Poetry meets from 8-10 p.m. every Monday at the Out of The Blue Art Gallery at 106 Prospect Street with an open mike sign-up at 7:30 p.m. On July15th, Rosa Nagle features on a very special Stone Soup with special guest hosts Toni Bee and Jason Wright.
Rosa Nagle was born in Winthrop, Massachusetts, the daughter of Italian immigrants. A graduate of UMass Boston with a BA in English. her first book of poetry, From Zephyr's Ankles, was published in 2005. In December of the same year, her poem “Ghost Story” appeared in The Iconoclast magazine. Her poem “Daydream” was published in Crucible magazine in 2009. In 2010, five poems of hers were included in an anthology of women's poetry, entitled Postcards from Eve.

On May 5, 2013, her play “On The Death Of June” had its first public reading at the Performing Arts Center of Metrowest, in Framingham, MA. She currently attends poetry workshops at Stone Soup.

Posted by Chad Parenteau at 1:31 AM 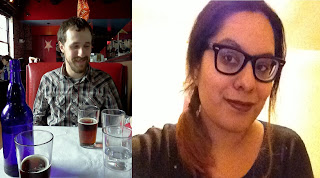 Stone Soup Poetry meets from 8-10 p.m. every Monday at the Out of The Blue Art Gallery at 106 Prospect Street with an open mike sign-up at 7:30 p.m. On July8th, Michael F. Gill hosts the night with a double feature by Kurt Klopmeier and Betsy Gomez.

Kurt Klopmeier comes from a farm near St. Louis, Missouri where he learned the beauty of silence and a love for comics. He's been published in ripple(s), Amethyst Arsenic, and Consequence Magazine, as well as an anthology of Dorchester, Massachusetts poets, Write on the DOT.

Betsy Gomez grew up in the desert in Southern California, near the Mexican border. She studied literature and Russian and Soviet Studies at UC San Diego, and has an MFA in poetry from UMass Boston. Her work has been featured in 580 Split, Amethyst Arsenic, and The Coachella Review. She is the recipient of the 2013 Emerging Writer Fellowship in poetry from the Writer's Room of Boston. This summer, you can find her working on poems and short stories, trying to learn a Brahms sonata, and watching cartoons.