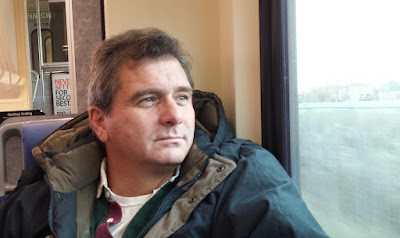 Moving forward, Stone Soup Poetry meets every Monday from 7-9 p.m. every Monday at the Out of The Blue Art Gallery, now at its new location at 541 Massachusetts Avenue in Central Square Cambridge, Massachusetts. On August 24, we conclude our summer session with the welcome return of David R. Surette, who is celebrating the release of his fourth full-length poetry collection.

David R. Surette’s new book of poetry is Stable, selected and new poems that feature the animals who have blessed his life. He is the author of four other collections: Wicked Hard, The Immaculate Conception Mothers‘ Club, Young Gentlemen’s School and Easy to Keep, Hard to Keep In which earned Highly Recommended status at the 8th Annual Massachusetts Book Awards. . He teaches English and coaches varsity hockey at East Bridgewater High School. He lives in South Easton, Massachusetts.
Posted by Chad Parenteau at 3:19 PM 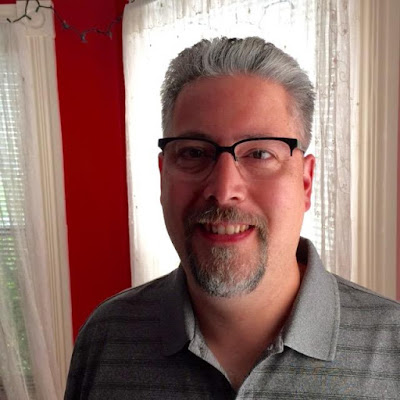 Moving forward, Stone Soup Poetry meets every Monday from 7-9 p.m. every Monday at the Out of The Blue Art Gallery, now at its new location at 541 Massachusetts Avenue in Central Square Cambridge, Massachusetts. On August 17, we head closer to the end of our summer series with a feature by a poet who deserves wider recognition, Alfred A. Zuñiga.

Several years ago, Alfred participated in Somerville Open Studios to debut a collection of works titled Modest Machinations of An Intrepid Insomniac. From that point on he discovered a new world in poetry: Wednesday nights at the Cantab Lounge in Cambridge, advanced workshops with poet Tom Daley,the  Poetry Salon with Ron Goba (a serendipitous reunion, as Ron had been a teacher at his high school). This led to the recent publication of his first pieces, “The Sea, Parts 1, 2 and 3” in Crow Point Living Magazine by N2 Publishing earlier this year.

His early work was raw and a bit naïve (at the time obsessed with rhyming), but his poetry has since flourished under Tom’s tutelage, and through sharing with a diverse community of poets and friends. There is a constant reminder posted over his desk, written in beautiful calligraphy: “A poem is an event, not the record of an event.”

Alfred is a Fine Art Handler for an art transportation company based in Boston, Massachusetts. He has a BA in Animation and Film Theory from University of Massachusetts at Boston. He lives in Dedham with his wife, Beth, and their two French bulldogs and cat.

Posted by Chad Parenteau at 9:38 AM 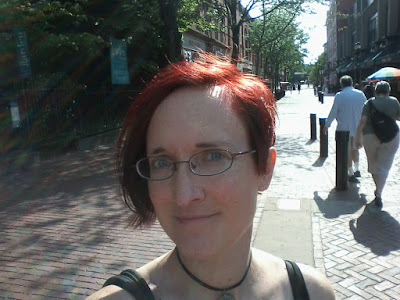 Moving forward, Stone Soup Poetry meets every Monday from 7-9 p.m. every Monday at the Out of The Blue Art Gallery, now at its new location at 541 Massachusetts Avenue in Central Square Cambridge, Massachusetts. On July 20,  On August 10,we welcome North Shore poet Mary Ann Honaker, who will be reading from her long awaited chapbook collection.

Mary Ann Honaker holds a B.A. in philosophy from West Virginia University, a Masters of Theological Studies from Harvard Divinity School, and is currently a student in the Creative Writing MFA program at Lesley University. She has previously published poetry in many online and print magazines, including Euphony, Caveat Lector, Off the Coast, Zig Zag Folios, Van Gogh's Ear, The Lake, and Oddball Magazine. Her first chapbook, It Will Happen Like This, is available now from YesNo Press of Salem. She lives in Salem, Massachusetts.

Posted by Chad Parenteau at 3:26 PM 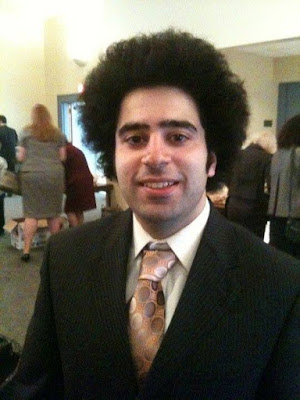 Moving forward, Stone Soup Poetry meets every Monday from 7-9 p.m. every Monday at the Out of The Blue Art Gallery, now at its new location at 541 Massachusetts Avenue in Central Square Cambridge, Massachusetts. On August 3, we welcome Emilio Phoenicio, who will be reading from his latest collection Living Breathing Poem.


Emilio Phoenicio, recently completed his Master's of Divinity at Holy Cross Greek Orthodox School of Theology this May. A deeply spiritual person, he loves laughing and making others laugh.
"However," he says, "my humor does not come out in my poetry, which is more intense. I have a deep care for others and wishe to have an authentic impact on others."  A man who discovered his penchant with words over two years ago and is grateful for it, he believes inward reflection  "is a necessity for my existence. Art has helped me with the longest journey in life which is from head to heart."

Posted by Chad Parenteau at 1:03 PM 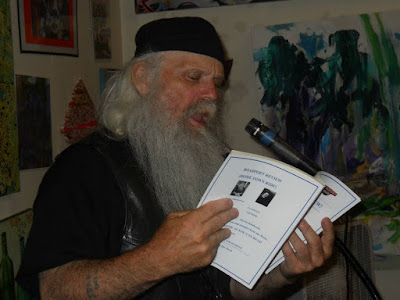 Moving forward, Stone Soup Poetry meets every Monday from 7-9 p.m. every Monday at the Out of The Blue Art Gallery, now at its new location at 541 Massachusetts Avenue in Central Square Cambridge, Massachusetts. On July 20, On July 27, biker poetry is once again added to our summer schedule with the return of motorcycle poet K. Peddlar Bridges as part of the Roadpoet Fortnight event this July.


K. Peddlar Bridges is a prolific and persistent talent, one of the founders of the Biker Poetry movement. Peddlar is a well recognized, unique voice currently living on the North Shore of Boston. The Roadpoet Fortnight is his brain child, and debuted in July, 2013. In addition to being a regular at many poetry venues, he also hosts RoadPoet Café, on ICAM, (the Ipswich Cable access station) and is working on a new collection of works about the poetic heritage of Gloucester.

Posted by Chad Parenteau at 5:00 PM

July 20: A night of song lyrics and poetry With Lo Galluccio at Stone Soup 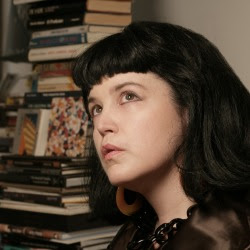 Moving forward, Stone Soup Poetry meets every Monday from 7-9 p.m. every Monday at the Out of The Blue Art Gallery, now at its new location at 541 Massachusetts Avenue in Central Square Cambridge, Massachusetts. On July 20, Stone Soup welcomes recent (and  hopefully not the final) Cambridge Poet Populist Lo Galluccio, who promises song, spoken word, and her own innovation of an open mic grab bag.

Lo Galluccio is a poet/prose-writer and vocal artist whose work has appeared in Literary Kicks,  Heat City Literary Review, Abramalin magazine, Night, the Home Anthology of Eden Waters Press, Lungfull Magazine!, Wilderness House Literary Review and The Audience Review, among others. In 2008, Cervena Barva Press released her prose-poem memoir, Sarasota VII and she appeared in Heide Hatry’s collection, Heads and Tales on Charta Books. In the summer of 2009, Propaganda Press published another chapbook called, Terrible Baubles. She has two albums on CD Baby: Being Visited  and Spell on You. She’s been nominated for three Pushcart Prizes in Poetry and read at The Somerville Arts Festival and St. Mark's Marathon Day Reading in NYC, among many other venues. Her first poetry chapbook Hot Rain, along with Sarasota VII and Terrible Baubles are all available at The Grolier Bookstore in Harvard Square in Cambridge, MA. Lo just finished serving as the 4th Poet Populist of Cambridge.
Posted by Chad Parenteau at 8:55 PM 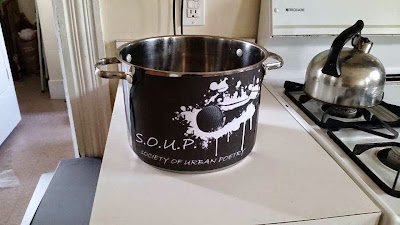 Our first slam was a bit o' a success! So come and join us for Stone Soup's 2nd Poetry Slam @ Out of The Blue Gallery located at 541 Mass Ave. Cambridge, MA 02139 right at the Central Square Red Line Train Station.

*This JUST in! Someone actually threw a stone in the soup! (Thanks Chad -_- ) We will be having a Micro Feature PROMPTLY at 7PM. Chad will host as Yuri Hospodar returns to Stone Soup in all the hot noodle glory that one can muster up after a 20 year absence. Yuri Hospodar, in a previous incarnation, had poems included in New York Quarterly, Stone Soup Poetry Quarterly, Boog City, and most likely a few other magazines, as well as appearing in An Anthology of New (American) Poets and online journals such as Shampoo. He moved to Australia and became antipodean in 2007; he is slowly reawakening and becoming reacquainted with words and such.

If you think you got what it takes, then step to the Stone Soup Mic and just, just: Just Slam!!
Posted by Chad Parenteau at 10:48 AM