There will be no feature or open mic tonight due to weather conditions.  We apologize for the inconvenience. 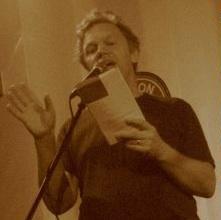 Stone Soup Poetry meets from 8-10 p.m. every Monday at the Out of The Blue Art Gallery at 106 Prospect Street with an open mike sign-up at 7:30 p.m. On November 12th, we welcome the return of Douglas Bishop.

Douglas Bishop, as a teacher, has worked with students from one to ninety, but now teaches English as a Second Language at a middle school in Lowell, Massachusetts. As a poet, he has performed in places as distant as Glasgow and Guatemala, but now appears primarily around Boston. He is known for bringing a literate eye to multi-voiced performances often incorporating musicians and singers as well as other poets. His two books, Songs in Love and The Eightfold Path (the latter includes a live recording involving nine poets and five musicians), are available through his website, bishopsky.com.
Posted by Chad Parenteau at 6:40 PM 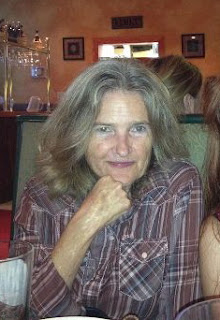 Stone Soup Poetry meets from 8-10 p.m. every Monday at the Out of The Blue Art Gallery at 106 Prospect Street with an open mike sign-up at 7:30 p.m. On November 5th, we welcome back poet and storyteller, CD Collins.

Kentucky native CD Collins follows the storytelling traditions of the South, both as a solo artist and when accompanied by musicians. As one of originators of the resurgence of spoken-word with live music, her work has been archived in three award-winning compact discs: Kentucky Stories, Subtracting Down and Carousel Lounge.

Collins’ fiction has appeared in numerous literary magazines including StoryQuarterly, Salamander, Phoebe and The Pennsylvania Review. Her short fiction collection, Blue Land, was published by Polyho Press.  Her poetry collection, Self Portrait with Severed Head, was published by Ibbetson Street Press.  Her work is available at Joseph Beth’s Bookstore and through her website www.cdcollins.com.

Collins has received grants from the Massachusetts College of Art, The St. Botolph Club, The Cambridge Arts Council, The Somerville Arts Council, and the Kentucky Foundation for Women.

Her recent projects include a novel about the psychological effect of WWII on the daughters of an American and a German soldier, a short biographical film about a devastating event that illustrates the necessity of government regulations. Forthcoming are a compact disc titled Clean Coal/Big Lie and a book of essays designed for a multimedia tablet display with  visual artist and designer Melody Farris Jackson Dutch artist and designer Markus Haala.

Collins has read and performed in a range of venues including Club Passim, Boston’s Institute of Contemporary Art,  Berklee College of Music and the New York Public Library. She has consulted on a variety of projects including the screenplay for Debra Granik’s Academy-Award-nominated Winter’s Bone, the breakout film for Kentucky native Jennifer Lawrence.
Praise for Blue Land:

“CD Collins has the voice of a natural-born storyteller.  The stories in this collection have the compressed beauty of poetry and the richness of novels.  Original and unforgettable.”
— Stephen McCauley
author, The Object of My Affection and Alternatives to Sex
Posted by Chad Parenteau at 6:26 PM

Cancelled Due to Weather! 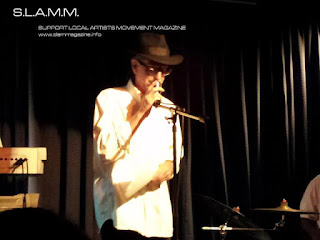 Stone Soup Poetry meets from 8-10 p.m. every Monday at the Out of The Blue Art Gallery at 106 Prospect Street with an open mike sign-up at 7:30 p.m. On October 29th, we welcome the return of Stone Soup friend, C.C. Arshagra.

Poet and songwriter C.C. Arshagra is a past producer of the Stone Soup Poets CCTV Show. He is the author of the Poems (1999), Emotional Geography (1996) and a three part chap book series called The Open Mike Poems. In the year 2000, he was a recipient of The Marcel Kopp Award. He has returned to Stone Soup. First in 2009 to mark the 39th anniversary of Stone Soup, then again in 2010 to participate in the 40th anniversary celebration and Jack Powers memorial.
Posted by Chad Parenteau at 6:23 PM 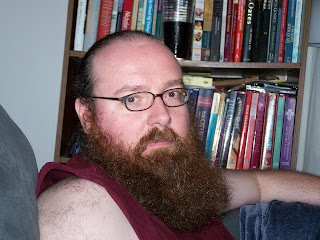 Stone Soup Poetry meets from 8-10 p.m. every Monday at the Out of The Blue Art Gallery at 106 Prospect Street with an open mike sign-up at 7:30 p.m. On October 22nd, we welcome the return of Rusty Barnes.

Rusty Barnes lives in Revere with his family, where he writes about rural Pennsylvania. He's published two chapbooks of poetry, 'Redneck Poems' and 'Broke.' A full-length poetry manuscript entitled 'Kissing Tolstoy' is making the rounds.

Posted by Chad Parenteau at 6:14 PM 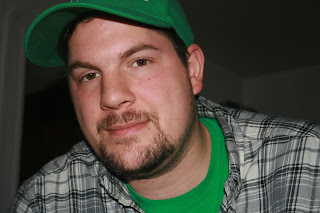 Stone Soup Poetry meets from 8-10 p.m. every Monday at the Out of The Blue Art Gallery at 106 Prospect Street with an open mike sign-up at 7:30 p.m. On October 15th, we welcoome online poetry editor Jason Wright.

Jason Wright, creator and Editor of Oddball Magazine and oddballmagazine.com,  is a  Graduate of UMass Boston, recent guest on Wheel of Fortune, and self proclaimed champion of mental illness. He has been published in Oddball Magazine 1-5 and oddball magazine online. Jason was given the English Award of Achievement at Bunker Hill Community College.  He is the host of the Decompression Sessions a Podcast online, and a recently retired series at Johnny D's in Somerville.  He has been featured on Talk Up with Charlie Peters, and a frequent performer at The Middle East, Cantab Lounge, Cafe Luna, and other local venues. He currently resides in Somerville, MA.

Posted by Chad Parenteau at 7:45 AM 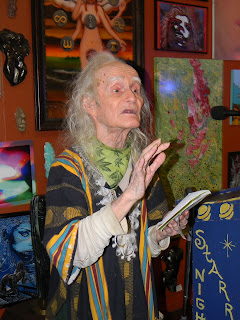 In addition to performing again, Bill Barnum (currently recovering at home) also has future publication to look forward to.  His poem, "Satan's Marbles," will be included in an anthology  that documents the history of the Boston Poetry Slam at The Cantab Lounge, a series that has existed in Boston for over twenty years.  Bill Barnum is not only featured in the anthology, but he is also its first entry.  What follows is a preview of the book with introductions to Barnum's section by Boston poetry mainstays Richard Cambridge and Robyn Su Millerz. Thanks to anthology editor Adam Stone for permission.

"The first thing you need to know is Billie is still writing, memorizing, choreographing, and performing every week at Squawk Coffeehouse. Mostly new material! At Eighty-Six! And I don’t mean three-minute poems. We allow Billie whatever he brings us, and it’s mostly ten minutes of word-dance. Only once in the last four or five years did I see him miss a line and have to go to his notebook to find his place. He shows up around 10pm, and closes the place with his latest piece. Billie is a paradox — a spoken-word mime. Think about that. Most folks think he’s some kind of ethereal-surreal free verse wordman, but in fact, if you get a peek at his journal you’ll see they are formal, rhyming, mostly iambic pentameter structured poems. Billie is such a master you never hear that singsong end-rhyme ‘cause he’s got you mesmerized with his dervish dance.

Most folks don’t know this, but Billie was a regular slammer, week-after-week. He never did win one that I recall. His work was on some other plane. To give him a score would be like trying to write on the river running by. I once asked Billie why he slammed. “For the money,” he said to me, matter-of-factly.

My favorite memory of Billie is on Finals Night when the National Slam came to town in ‘92. Michael Brown gave Billie his props and introduced him to the audience. Billie did the opening feature dressed in his cap & bells, and pixieslippers, and wowed the crowd. No one had ever seen the likes of him before.

Billie is as rare and pure as a unicorn, and he hides in plain sight among us."


"Billy Barnum is an ageless portal to a nearly bygone era. His mind channels a time most poets have forgotten, when poems were danced. Rhymes are still used as a mnemonic device but the practice of placing a step to mark the “feet” in a line is all but forgotten. Although it will be a treat to see his work on page, those privileged to have seen him perform will remember the hush that fell over the room in order for us to marvel at each step that found its mark and catch each word that floated up out of his pipes, and his presence, rhythm and sound will echo within as we read."

Posted by Chad Parenteau at 8:57 AM