Charlie Rose studied creative writing at Bennington College and completed a BA in Classical Studies at UC Santa Cruz, which makes him a Banana Slug at heart. He returned to the East Coast to go to grad school, and now has a day job writing software at a local university, which lets him indulge his creative writing habit as well as enjoy a lot of great local music. He has been known to frequent local poetry open mikes such as Stone Soup, the Cantab (where he reads as Charlie R,) and the Lizard Lounge.

In 1997, Nora Meiners graduated from Emerson College with a BFA in Creative Writing. Like so many who fall in love in college, Nora and writing found that they were not meant to spend “forever” together. After one memorable knock-down brawl of a shouting match, Writing quit her. They have recently mended ways and you can see/hear Nora out at poetry slams. Nora’s renewed interest in writing has her telling everyone, “Give me three minutes, and I will spoken word your ear off.” The way to her heart is through corny plays on words and she hopes you feel the same. If you want to know more, check out her website, poetsthatdontknowit.com. She lives in Cambridge, MA where she is raising a 4-year-old son as a single mum, and spends her days working as the “missing pieces person for a jigsaw puzzle company”. Yes, that is the real job title.

Posted by Chad Parenteau at 5:48 PM 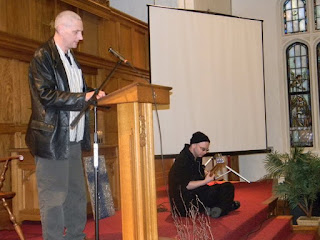 Stone Soup Poetry meets from 8-10 p.m. every Monday at the Out of The Blue Art Gallery at 106 Prospect Street with an open mike sign-up at 7:30 p.m. On May 28, we end the 41st anniversary month-long celebration with music and poetry from Da Butcha 'shoppe.

Da Butcha ‘shoppe mixes all forms of entertainment to bring Poetry to life, from burlesque to comedy to dance to everything in between.

Da Butcha ‘shoppe has appeared on stages in New Hampshire, Maine, and Massachusetts, amazing and astounding all.

Some of their performances have included Butcha’s birth of a rubber chicken, the Alien, and interpretive dance.

Due to the fact that they blow minds every time they appear, they have been called the most interesting group on stage today and reviews of their sets have ranged from “I’ve never seen anything like that before.” to “I don’t know what I just saw, but I liked it!” to “WOW, that was incredible!”

Generally, as a rule, Da Butcha ‘shoppe challenges what the public thinks of as Poetry, their tag line, “this is not your father’s Poetry.”

Posted by Chad Parenteau at 2:49 PM 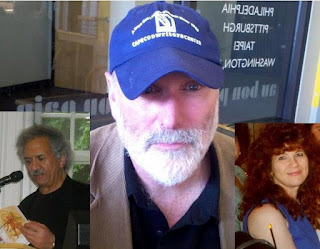 Stone Soup Poetry meets from 8-10 p.m. every Monday at the Out of The Blue Art Gallery at 106 Prospect Street with an open mike sign-up at 7:30 p.m. On May 21st, Stone Soup welcomes the return of three old mainstays of the open mike: poet/activist Susie Davidson, Tapestry of Voices founder Harris Gardner, and former Stone Soup President Doug Holder.

Doug Holder is the founder of the Ibbetson Street Press. He teaches writing at Bunker Hill Community College and Endicott College. Holder is the Arts Editor for The Somerville News, the Director of the Newton Free Library Poetry Series, and former President of Stone Soup Poets. Holder's work has appeared widely in the small press including Rattle, Iodine, Toronto Quarterly, The Scrambler, The Oak Bend Review, the new renaissance, Word Riot, and many others. He holds an MA Literature from Harvard University.

Boston-area poet and freelance journalist Susie Davidson writes regularly for The Jewish Daily Forward, the Jewish Advocate, The Jewish Journal, the weekly Tabs and other media, and has contributed to the Boston Sunday Globe and the Boston Herald (op-ed), the Jerusalem Post and the Eagle-Tribune. She has been published over 150 times in varied poetry journals across the U.S. and Canada. Susie began and hosted the OccuPoetry series at Occupy Boston with poets Peter Desmond and Robyn Su Miller, which was the subject of a front-page Metro article in the Boston Globe in November, 2011.

Harris Gardner is founder of Tapestry of Voices--a poetry organization that sponsors the Boston National Poetry Festival and other venues. His work has appeared in the Harvard Review, Ibbetson Street Midstream, Aurorean and many other magazines. He is the poetry editor for Ibbetson Street, and co-founder of Somerville 's Bagel Bards. He is the author of three collections: Chalice of Eros (C o-authored with Lainie Senechal), Lest They Become ( Ibbetson Street ) 2003, and Among Us (Cervena Barva Press). In 1999, he founded Breaking Bagels with the Bards, community of Poets and Other Writers. He currently serves as Poetry Editor of Ibbetson Street.\
Posted by Chad Parenteau at 5:23 PM

UPDATE: Due to unforeseen events, Prabakar will neither be in the states nor available at Doyle's Cafe to read his work this coming Sunday. We still implore you to come to the event and hear his poems as read by respected Boston poet and instructor Tom Daley. Ron Goba, of course, will still be in attendance, and the chapbook of poems frim both Ron and Prabakar will still be available. Please come down the night of May 20th and help make this night a success. 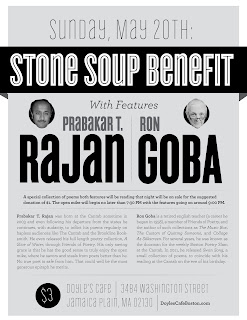 Join us on Sunday Night, May 20th, as Stone Soup welcomes your voices and a special focus on two amazing poets on the Boston Scene as Stone Soup holds it's first fundraising benefit in years to help keep the reading series more self sustaining and better benefit it's feature poets. Admission to the event is $3. A special collection of poems both features will be reading that night will be on sale for the suggested donation of $1. The open mike will begin no later than 7:30 PM with the features going on around 9:00 PM.

Prabakar T. Rajan was born at the Cantab sometime in 2003 and even following his departure from the states he continues, with audacity, to inflict his poems regularly on hapless audiences like The Cantab and the Brookline Booksmith. He even released his full length poetry collection, A Slice of Water, through Friends of Poetry. His only saving grace is that he has the good sense to truly enjoy the open mike, where he savors and steals from poets better than he. No true poet is safe from him. That could well be the most generous epitaph he merits.

Ron Goba is a retired english teacher (a career he began in 1958), a member of Friends of Poetry, and the author of such collections as The Music Box, The Custom of Quoting Someone, and Collage As Silkscreen. For several years, he was known as the doorman for the weekly Boston Poetry Slam at the Cantab. In 2011, he released Swan Song, a small collection of poems, to coincide with his reading at the Cantab on the eve of his birthday.
Posted by Chad Parenteau at 7:38 AM

Stone Soup Poetry meets from 8-10 p.m. every Monday at the Out of The Blue Art Gallery at 106 Prospect Street with an open mike sign-up at 7:30 p.m. On May 14th, we welcome performance poets James Leaf and Bobby Crawford, hosted by Michael F. Gill.

James Leaf is a stage director, actor, acting teacher, and artistic director of the Young Mechanics Theatre Ensemble in New Haven Connecticut. In the last year he has also worked as an instructor for Poetry Out Loud, a country-wide high school recitation contest sponsored by the National Endowment for the Arts. He'd like to thank Stone Soup for the invitation, and the opportunity to share his poems and banter.

Bobby Crawford is currently co-curator of the Emerson Poetry Project and is a two-time CUPSI slam team member representing Emerson College. He has performed poems on genetics with Donnie Welch at the Boston Museum of Science, and presented a co-written (also with Donnie Welch) chapbook entitled: Shift: Poems about Plate Tectonics at the Cambridge Science Festival.

Posted by Chad Parenteau at 5:01 PM