Stone Soup Poetry meets from 8-10 p.m. every Monday at the Out of The Blue Art Gallery at 106 Prospect Street with an open mike sign-up at 7:30 p.m. On July 12th, Joanie DiMartino will debut her first poetry book Strange Girls, for the Boston area.

Joanie DiMartino has work published in literary journals including Alimentum, Calyx, Wicked Alice Poetry Journal, and Modern Haiku, and also in anthologies, such as Motif: Writing by Ear, Letters to the World: Poems from the Wom-Po Listserv, and New Growth: Recent Kentucky Writings. She is a past winner of the Betty Gabehart Award for poetry from the Women Writers Conference, Kentucky, and was a finalist in the Cultural Center of Cape Cod poetry competition. She is a founding member of the women’s poetry group Mosaic, in Lexington, Kentucky, and is currently also a member of Poets & Writers Consortium East in Groton, Connecticut. Her first chapbook, Licking the Spoon, was published in 2007 by Finishing Line Press, and her first full-length collection, Strange Girls, about women in sideshows, circuses, and carnivals, was released in June, 2010 from Little Red Tree Publishing.

Her poems have been featured in several art exhibits in Lexington, Kentucky, including Sideshow, a collaborative project with the Women Artists Group; Collaborations + Catalysts, an exhibit highlighting combined mediums; and Connections, an interfaith exhibit, where her poem, “The Monks,” an experimental piece incorporating Gregorian Chant throughout the poem, was performed. She was most recently featured in the exhibit Women in the Arts, a show by local artist Deborah Curtis, where her portrait and poem, “Self-Portrait,” were on display at ArtWorks in Norwich, Connecticut.

DiMartino holds an MA in public history from Rutgers University. She has worked in the history museum field for fifteen years, and her poetry often pairs history with a feminist perspective. She hosts ‘Soup & Sonnets,’ a monthly literary salon for women, and, along with performing poetry, leads workshops and discussion groups. Raised in southern New Jersey, DiMartino has lived in Lexington, Kentucky, and now resides with her son, Dante, in Mystic, Connecticut. 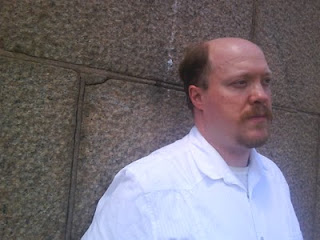 Anne Brudevold features tonight.
Posted by Chad Parenteau at 7:30 AM

Stone Soup Poetry meets from 8-10 p.m. every Monday at the Out of The Blue Art Gallery at 106 Prospect Street with an open mike sign-up at 7:30 p.m. On June 28, poet, author and musician Don Hammontree will close off the month of June for Stone Soup with a mix of spoken word and acoustic music.

Don Hammontree is a writer, singer, and photographer who resides in Fall River, Mass. A native Midwesterner, he has gigged all along the East Coast and the American heartland, and has also performed in Poland and Ukraine. He has released three solo CDs, "Mount Hope Days" in 2003, "The Mumbai EP" in 2005, and "Brutalist School" in 2010.He has also self-published a novel, "Baptized in Formaldehyde," described as a "sex, drugs and rock and roll tome for the whole family." His music can be sampled at iTunes and www.cdbaby.com/artist/DonHammontree.

Stone Soup Poetry meets from 8-10 p.m. every Monday at the Out of The Blue Art Gallery at 106 Prospect Street with an open mike sign-up at 7:30 p.m. On June 21, local author Jade Sylvan presents the local youth group Books of Hope as they tour throughout New England this summer.

Books of Hope seeks to give the next generation of young authors the tools they need to bring their talents into the world and help shatter the negative stereotypes that often surround urban youth. Based in the Mystic Housing Project in Somerville Massachusetts, its mission is to empower young people to find their voices and give back to their community through creative writing, book production, performance, and social entrepreneurship.

Through the process of writing, designing, and promoting their own books of poetry, creative nonfiction, and short stories, young authors become aware of the power they hold within themselves to open doors and create positive change. The program provides a safe space for at-risk teens, primarily from families of Haitian immigrants, to use their creativity constructively and spread inspiration and motivation to others. Now in its tenth year, Books of Hope is extending its reach from Somerville and the surrounding areas to the rest of New England and beyond.

Visit the Books of Hope web site.
Posted by Chad Parenteau at 7:47 PM