Stone Soup Poetry meets from 8-10 p.m. every Monday at the Out of The Blue Art Gallery at 106 Prospect Street with an open mike sign-up at 7:30 p.m. On October 10th, we celebrate the legacy of Mike Amado with Jack Scully and Nancy Brady Cunningham reading from Amado's first posthumous collection.

The late Mike Amado was the co-founder, along with Jack Scully, of two ongoing poetry venues in Plymouth, Massachusetts , Poetry: The Art of Words a monthly poetry series and The Poetry Showcase a yearly poetry reading held in conjunction with the Plymouth Guild for the Arts yearly juried art show. Mike Amado published three books of poetry during his short time on this earth. Scully and poet Nancy Brady Cunningham have edited his fourth book, The Book of Arrows.

Nancy Brady Cunningham is a published poet and author of 5 books of non-fiction. Nancy has featured at many venues, including Boston’s First Night 2000 in Big Night at the Bookhouse at the Boston Public Library. Her international experience includes readings in Paris, Toronto, and Lesbos, Greece. She is the founding member of the poets’ theater troupe IYANU, which has performed in Cambridge at the Blacksmith House, Club Passim, and Squawk Coffee House, as well as in Easton at the Blackthorne Tavern.
Posted by Chad Parenteau at 4:16 PM 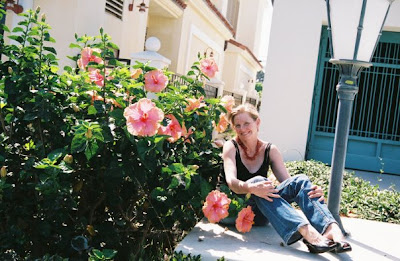 Stone Soup Poetry meets from 8-10 p.m. every Monday at the Out of The Blue Art Gallery at 106 Prospect Street with an open mike sign-up at 7:30 p.m. On October 3rd, eturning to feature at Stone Soup is local poet and regular open miker Elizabeth K. Doran.

Elizabeth K. Doran has been influenced as a poet by modern women writers such as Sharon Olds and Louis Gluck. Although she would never want to be called a "nature poet" nature is always present in her work. "Nature is part of the environment we all share and informs my sensibility," she says. Elizabeth is drawn to syllabics and loves long syllabic lines. A major influence is Eugino Montale who in 1975 was awarded the Nobel prize for literature.

She has been published in Poises and Spare Change news and has read at many Venues in Boston and beyond. She is the former host of poetry at Gallery Diablo.
Posted by Chad Parenteau at 3:29 PM 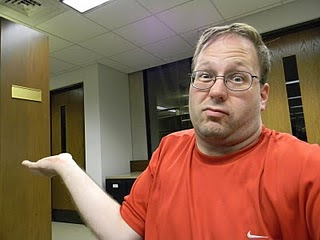 Due to more than one scheduling error and one too many events planned in a row (i.e. Chad f***ed up AGAIN), Stone Soup was unable to secure a feature for September 26th. As a result, the night belongs to the open mikers with an ultra-extended open mike segment. People always afraid of showing up late for the open mike, coming with a poem that's too long (note: this almost never happens) or not knowing whether a particular night is a good night to debut a different kind of poem, Stone Soup says "Come on down!" People who have been away are welcome. People who have never been are welcome. We want to hear from you.
Posted by Chad Parenteau at 5:52 PM 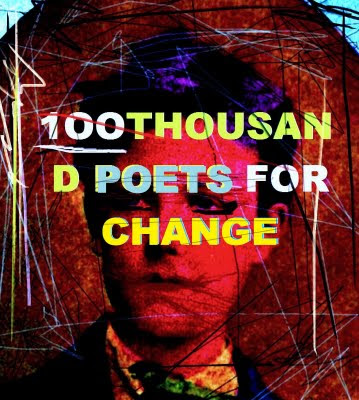 Tomorrow, at the Out of The Blue Art Gallery on 106 Prospect Street, Central Square, Cambridge: Stone Soup joins over over 335 cities representing 68 countries to take part in this this global initiative promoting the themes of peace and social change with poetry readings, political demonstrations, community picnics, awareness events, parades, and more!

Poets: Come read and share your work, or email a poem to be read for the recording of the event.

Musicians: Lend your voices as well.

Art Lovers: Come enjoy the atmosphere of the gallery, free food, and the multitude of voices!

The show begins at 11:30. Slated performers include:

and many other old and new friends.

Email us with any questions: stonesouppoetry@yahoo.com
Posted by Chad Parenteau at 5:52 PM 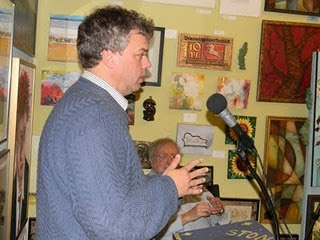 Stone Soup Poetry meets from 8-10 p.m. every Monday at the Out of The Blue Art Gallery at 106 Prospect Street with an open mike sign-up at 7:30 p.m. On September 19th, we celebrate Gordon Marshall's return. Marshall will feature his latest book and be on hand to present this year's Jack Powers Stone Soup Savor Poetry Prize.

Gordon Marshall will be celebrating the release of his tenth volume of poetry, Poet of the Smashed Palace (Shires). Gordon is an accomplished jazz critic as well as poet. His criticism can be found on the All About Jazz website, as well as The New York City Jazz Record. His nine previous volumes of verse are available through Shires Press, Manchester Ctr, VT. He lives in Boston's North End.
Posted by Chad Parenteau at 4:27 PM 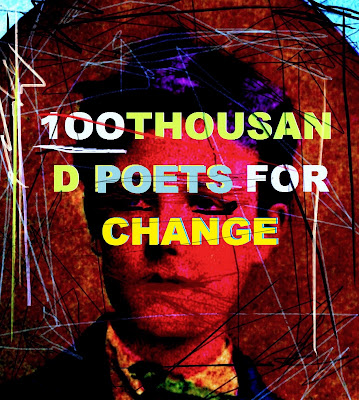 Poets around the world are planning individual events to take place simultaneously on September 24th in a demonstration/celebration of poetry to promote social and political change.

So far over 335 cities representing 68 countries have signed up to make this global initiative a success through poetry readings, political demonstrations, community picnics, awareness events, parades, and more!

Michael Rothenberg, the event's creator, envisions "a demonstration/celebration of poetry to promote serious social, environmental, and political change." Guidelines are peace and sustainability, and local groups define local issues within. Anyone with ideas of where to take this are welcome to contribute thoughts and more.

Stone Soup Poetry has elected to help Boston poets represent themselves for this event. The Out of The Blue Art Gallery Cambridge has allowed us to use their site as the initial "headquarters" as we seek volunteers and possibly other sites to hold this event simultaneously. If you have or know of a Boston area location that could offer us space for the day, please contact me at chadpoetforhire@yahoo.com or stonesouppoetry@yahoo.com as soon as you can.

Our tentative time frame is from 11:30 AM to 8:00 PM on Saturday, September 24th. But if we get enough volunteers to keep the celebration going, we will.

We are also looking for the following:

People wiling to read their poetry throughout the day. The more the merrier.

Musicians and other performers.

People willing to record the event for prosperity.

People willing to help set up streaming video which will be used in conjunction with the main 100 Thousand Poets for Change website.

We also hope to load YouTube segments throughout the day.

If you are a poet or other performer who would like to contribute to the Boston effort, contact me at chadpoetforhire@yahoo.com or stonesouppoetry@yahoo.com as soon a possible. We want as many possible to attend. Let's make this an event to remember.

Visit the 100 Thousand Poets for Change website for more news on this global event.

Stone Soup Poetry meets from 8-10 p.m. every Monday at the Out of The Blue Art Gallery at 106 Prospect Street with an open mike sign-up at 7:30 p.m. On August 29th, we welcome back New York poet and past Stone Soup feature Stewart Florsheim to the podium.

Stewart Florsheim was born in New York City, the son of refugees from Hitler's Germany. He has received several awards for his poetry and was recently nominated for a Pushcart Prize. He has been widely published in magazines and anthologies. Stewart was the editor of Ghosts of the Holocaust, an anthology of poetry by children of Holocaust survivors (Wayne State University Press, 1989). He wrote the poetry chapbook, The Girl Eating Oysters (2River, 2004). In 2005, Stewart won the Blue Light Book Award for The Short Fall From Grace (Blue Light Press, 2006). His new collection, A Split Second of Light, was published by Blue Light Press in 2011 and received an Honorable Mention in the San Francisco Book Festival, honoring the best books published in the Spring of 2011.

He has been awarded residencies from Artcroft and the Kimmel Harding Nelson Center for the Arts. Stewart also writes non-fiction. Stewart's day job is in the technical writing field. He is also co-chair of the Board of Directors of Compassion and Choices of Northern California, an organization that helps the terminally ill make end-of-life decisions. Stewart lives in the Bay Area with his wife, two daughters, and their dog, Roxie.
Posted by Chad Parenteau at 2:43 AM