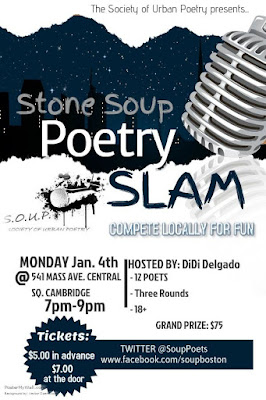 If you think you got what it takes, then step to the Stone Soup Mic and just, just: Just Slam!!!


Stone Soup Poetry meets every Monday from 7-9 p.m. every Monday at the Out of The Blue Art Gallery, now at its new location at 541 Massachusetts Avenue in Central Square Cambridge, Massachusetts. On December 28 Stone Soup bids farewell to 2015 with what promises to be a stellar reading by poet and instructor Tom Daley.
Tom Daley (the American writer, not the British Olympic diver!) has worked as a waiter, prep cook, dishwasher, and free school teacher. He spent over two decades repairing and retrofitting molds as a machinist in a factory where he practiced his very bad Spanish with patient co-workers from Central and Latin America. He now leads writing workshops in the Boston area and online for poets and writers working in creative prose. Recipient of the Dana Award in Poetry and the Charles and Fanny Fay Wood Prize from the Academy of American Poets, his poetry has appeared in Harvard Review, Massachusetts Review, 32 Poems, Fence, Denver Quarterly, Crazyhorse, Barrow Street, Rhino, Prairie Schooner, Witness, Poetry Ireland Review, Conte, and elsewhere. His poems have been anthologized in Hacks--10 Years on Grub Street, The Body Electric, Unlocking the Poem, Bagels with the Bards (No. 4), 20 Years at the Cantab, and "'Relentless' by Jeff Bezos" (Berfrois).
He is the author of two plays, Every Broom and Bridget--Emily Dickinson and Her Irish Servants and In His Ecstasy--The Passion of Gerard Manley Hopkins, which he performs now as one-man shows. During one performance of Every Broom and Bridget, he noticed that a row of audience members had stopped watching the play because they were too busy ticking off the poems and letter excerpts listed in the program as they were performed. He wanted to suggest that this wasn't the Emily Dickinson version of Bingo, but he held his tongue, unusually for a man who comes from a family that put the "pro" in "inappropriate."
As poet-in-residence at the Boston Center for Adult Education, he staged several poetry-performance galas, including "The Poetry Vaudeville Show." In one of the skits, the performers line up and distribute pieces to workshop (the hardest thing to do in a workshop!) to the frenetic pace of "The Typewriter." You can watch him on MeFeedia (http://www.mefeedia.com/channel/6224/episodes/3-look for "Tom Daley @BCAE") play his Irish great-great grandmother Shanahan denouncing the American habit of chilling beer and the obnoxious practice of ending an encounter with "Have a nice day!" in another gala at the BCAE.
Posted by Chad Parenteau at 2:25 AM


FEATURE GOES ON EARLY. GET TO THE GALLERY EARLY


Stone Soup Poetry meets every Monday from 7-9 p.m. every Monday at the Out of The Blue Art Gallery, now at its new location at 541 Massachusetts Avenue in Central Square Cambridge, Massachusetts. On December 21, Stone Soup partners with the Society of Urban Poets to bring you a holiday party that  begins with a reading from Boston's newest Poet Laureate, Danielle Legros Georges.

Danielle Legros Georges, the current Poet Laureate of the City of Boston, is a professor in the Creative Arts in Learning Division of Lesley University. She also teaches in the Joiner Institute for the Study of War and Social Consequences summer Writer’s Workshop, University of Massachusetts, Boston. Her poems have been widely anthologized, and recent essays of hers have appeared in Others Will Enter the Gates: Immigrant Poets on Poetry, Influences and Writing in America (ed. Abayomi Animashaun) and Anywhere But Here: Black Intellectuals in the Atlantic World and Beyond (eds. Kendahl Radcliffe and Jennifer Scott). She is the author of the volume of poems Maroon. A second book of poems, The Dear Remote Nearness of You, is forthcoming from Barrow Street in 2016.

Posted by Chad Parenteau at 8:27 PM