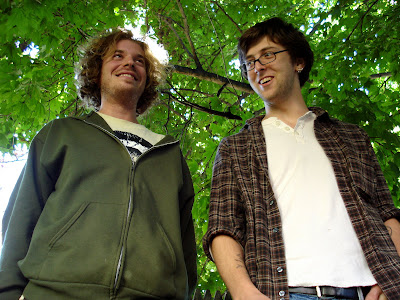 Stone Soup Poetry meets from 8-10 p.m. every Monday at the Out of The Blue Art Gallery at 106 Prospect Street with an open mike sign-up at 7:30 p.m. On February 2nd, Stone Soup Poetry has the pleasure of being one of the last stops for Sam Teitel and Steve Subrizi as they finish up their Two Sensitive Guys tour.

Sam Teitel and Steve Subrizi are both poets form the Boston area. Steve is a member of Emerson College's award-winning CUPSI team, The Gringo Choir. Sam is a member of Manchester New Hampshire's slightly less award-winning but still perfectly respectable National Poetry Slam team, Slam Free Or Die. They have just returned from performing their work across the country, driving Sam's Scion XB to such venues as The Mercury Cafe in Denver and The Green Mill in Chicago. They are collectively responsible for one CD and three chapbooks, including a collaborative chapbook, Beet-itude: The Super Deluxe Collector's Edition, which is a collection of poetry about the beet, 'nature's candy.'

Visit the Two Sentsitive Guys Blog.
Posted by Chad Parenteau at 2:58 AM

Stone Soup Poetry meets from 8-10 p.m. every Monday at the Out of The Blue Art Gallery at 106 Prospect Street with an open mike sign-up at 7:30 p.m. On January 26th, we welcome the return of Lowell poet Meg Smith.

Meg Smith writes and publishes poetry, fiction, articles, essays, and arts and entertainment reviews. She is the editor of Red Eft, a publication of speculative literature and art and for four years was editor and publisher of The Banshee, a zine based in Lowell, Mass. honored by grants from the Massachusetts Cultural Council.

She frequently appears at poetry readings throughout the area and have hosted numerous open mics and have produced several literary events -- including events combining my passion for literature and Middle Eastern dance.

She served for 14 years on the planning committee and board of directors of the annual Lowell Celebrates Kerouac! festival honoring Lowell, Mass. author and native son Jack Kerouac.

Visit the Poet's web site.
Posted by Chad Parenteau at 2:34 AM

Posted by Chad Parenteau at 2:31 AM

Stone Soup In The Wintertime

Don't let the two days of of snow stop you from coming to see Tara Skurtu at Stone Soup tonight.
Posted by Chad Parenteau at 5:20 PM

Tonight, Sam Cha Features.
Posted by Chad Parenteau at 2:30 AM

Filmed on January 5th, 2009. The near-entirety of Stone Soup Poetry's open mike was given over to tributes for Mike Amado, who passed away from end-stage kidney disease the Friday before, January 2, 2009. I spent most of that night recording videos and transferring them to a flash drive to avoid anything getting lost. Some tributes were missed, and I changed the order of the performances a bit. Jack Scully's spot on the open mike, early in the night, was moved to parts two and three, since I wanted to end with that.

The video segment of Mike reading that I used for the intro was taken from the Poetry Showcase in Plymouth last September. Unfortunately, I wasn't able to record all of Mike's poem, as the power went out in my camera just as he was getting to the end. Still, I was able to put the footage to good use here.

Those of you who want to see the original, chronological, and therefore more erratic version can get the DVD of the event as recorded by Bill Perrault for airing on Cambridge and Lowell public access TV. Email stonesouppoetry@yahoo.com, and I'll forward your request to him (he usually requests $5.00 for each DVD). 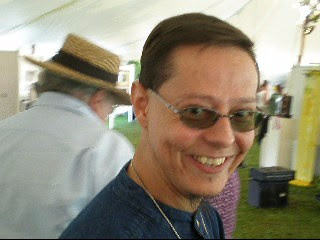 Mike Amado was a fellow poet and a fixture in the Boston poetry scene, despite his home base being in Plymouth, where he hosted a monthly series. His ability to get around--and appear to be everywhere--in spite of the distance, his dependency on friends and public transportation, and his long battle with kidney disease, was something I admired in him. He even briefly served as (his words) the feature wrangler for Deb Priestly's Open Bark at Out of The Blue. We read together a few times (once as co-features for Jamaica Plain's Word On The Street), and I had the pleasure of being introduced by him for my own feature at Open Bark in 2007. Last September, he invited me to be part of a reading coinciding with Plymouth's 41st Annual Juried Art Show. The film I shot that day of just having fun with friends turned into my "Plymouth Quest" series. I haven't even finished it, and I'm still looking forward to, only now with an eye for adding as many clips of goofing around with Mike as possible.

The last thing we filmed was the commerical for the Out of The Blue Holiday Raffle, shot right outside the gallery just after the Ibbetson Street reading last November. It was the last time I would see him. What wasn't shared with the public (because I misplaced the video file) was a reading by him from his latest book, Rebuilding the Pyramids (Poems of Healing in a Sick World). I was impressed with his newest work and his bravery to tackle a topic that was clearly an ongoing struggle for him and one that didn't allow him that great an advantage of hindsight. I was looking forward to buying his book and featuring him at Stone Soup again in a few months.

I only got more and more friendly with Mike very recently. I never asked him about his struggle for a donated kidney (even when news of it was shared online). When we were about to shoot the raw footage for the raffle advertisement and I handed him the ticket roll, he laughed and said he thought he was going to be able to hit me this time. Having seen the idea online recently, I said later that we should have an online imaginary feud (with filmed footage and bonus sound effects). Of course I'd let him get even with me later. Of course he was up for that.

I really wish I'd let him take an imaginary swing at me that day.

I hope I can find the clip of him reading from his new book. I hope he signed his for a few of us. Talking with his friend Jack Scully, I found out there is enough of his poetry for maybe four or five more books. I owed him a lot, and I'm still selfish enough to want more from him. Luckily, with friends as gifted and determined as Mike, we sometimes get that. 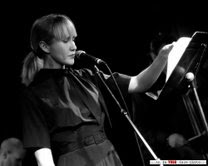 Stone Soup Poetry meets from 8-10 p.m. every Monday at the Out of The Blue Art Gallery at 106 Prospect Street with an open mike sign-up at 7:30 p.m. On January 19th, Stone Soup continues its New Year's resolution to feature more new voices by introducing Tara Skurtu.

Tara Skurtu studies creative writing at the University of Massachusetts, Boston. Her poem "Visiting Amber at the Lowell Correctional Institution" was awarded runner-up for the 2008 Harold Taylor Poetry Prize sponsored by the Academy of American Poets (judged by Yale professor/poet Elizabeth Alexander). She is currently studying with Lloyd Schwartz. A sample poem follows below.


My Blood: My Blood

Some days it begins like this—
The fear of forgetting I am well
crawls into my mouth like a word
that regrets being spoken;
it presses sour phrases against
my teeth, tongue, and gums.
I want to tell it stop,
that I am well,
that my blood is my blood,
but as I ready to swallow,
it wedges another phrase
onto the back of my tongue—
something about the flawlessness
of the antibody’s memory,
how it never forgets
the image of the mother
that abandoned it here
in this body—
yes, some days begin like this. 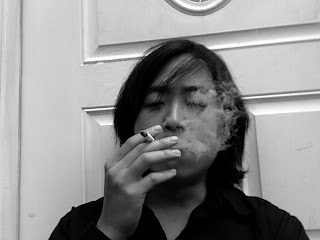 Stone Soup Poetry meets from 8-10 p.m. every Monday at the Out of The Blue Art Gallery at 106 Prospect Street with an open mike sign-up at 7:30 p.m. On January 12th, Stone Soup welcomes the return of Sam Cha.

Sam Cha is 30, lives in Somerville. Here are a few salient facts, in descending order of relevance and ascending order of importance. He writes stuff and translates stuff. He loves some people and likes many and hates few. Soon he will be a father.

Click here for a poem by Sam Cha in Spoonful.
Posted by Chad Parenteau at 9:01 PM 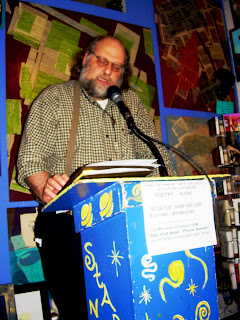 Stone Soup Poetry meets from 8-10 p.m. every Monday at the Out of The Blue Art Gallery at 106 Prospect Street with an open mike sign-up at 7:30 p.m. On January 5th, Stone Soup rings in the new year with poet and photographer Edward S. Gault celebrating his first poetry feature.

Edward S. Gault has been writing poetry since his teens, thankfully for American Letters, these early works have been lost or destroyed. He didn't give up however and has since published in Encore, Spare Change, and Spoonful. Through the years he has read his work at Stone Soup Poetry, Open Bark, Tapestry of Voices, Small Circle Of Friends, and The Boston Poetry Slam. Since January 24, 2008, He has managed to post one poem a day (usually, but not limited to, haiku) on his blog Forest River Journal. Gault is also a Fine Arts Photographer. His work has been displayed in the Out Of The Blue Art Gallery, Inman Square's 1369 Coffeehouse, and The Cambridge Center For Adult Education.