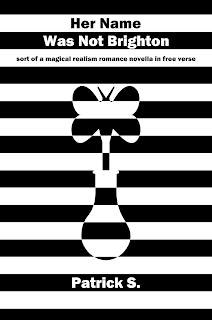 Stone Soup Poetry meets from 8-10 p.m. every Monday at the Out of The Blue Art Gallery at 106 Prospect Street with an open mike sign-up at 7:30 p.m. On December 30, Patrick S. will provide us a terrific close to 2013 with his first feature debuting his first full-length book of poetry.

Patrick S. is a co-organizer of Lowell, Massachusetts's Mill City Slam and was a member of its 2010 National Poetry Slam team. He has featured at numerous poetry venues in the Northeast, including past features at Stone Soup. He will be debuting his first full-length book, a narrative 47-poem series entitled Her Name Was Not Brighton composed during many sessions of the Brighton Word Factory writing group. He describes the book as "sort of a magical realism romance novella in free verse", as it otherwise defies attempts at classification.
Posted by Chad Parenteau at 7:50 AM 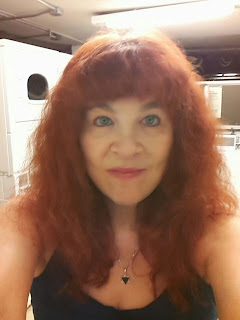 Stone Soup Poetry meets from 8-10 p.m. every Monday at the Out of The Blue Art Gallery at 106 Prospect Street with an open mike sign-up at 7:30 p.m. On December 23, we welcome back Susie Davidson to the venue.

Susie Davidson is a poet, journalist, author, and filmmaker who writes regularly for the Jewish Advocate, the Jewish Daily Forward in New York, the Cambridge Chronicle and other media. Her article on medical marijuana, published this month in Israel's largest daily, Ha'aretz, received almost 7000 Facebook recommendations. She has also contributed to the Boston Sunday Globe, the Boston Herald and the Jerusalem Post. She was the feature of a July, 2012 "G-Force" full-page Boston Globe profile.

She has written two books about local Holocaust survivors. She organized the 2011 OccuPoetry series at Occupy Boston in Dewey Square, Boston, which received a front-page Boston Globe Metro section writeup in November, 2011. She is Coordinator of the Boston chapter of The Coalition on the Environment and Jewish Life, a board member of the Alliance for a Healthy Tomorrow and the Jewish Alliance for Law and Social Action, and coordinates the Brookline Library Authors' Collaborative.

Posted by Chad Parenteau at 7:49 AM 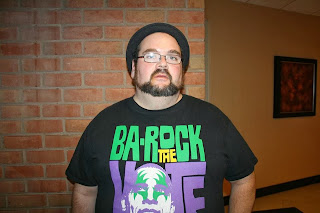 Stone Soup Poetry meets from 8-10 p.m. every Monday at the Out of The Blue Art Gallery at 106 Prospect Street with an open mike sign-up at 7:30 p.m. On December 16, we welcome performer, author, podcast host and venue host Zeke Russell back to our venue.

Ezekiel "Zeke" Russell is a third generation poet. He grew up in an artist's collective in Central Maine where he learned to express himself and also how to split wood. He lived for ten years in Lowell MA. During that time he helped to organize the Untitled Open Mic at Brew'd Awakening Coffee House. He still organizes the slam for that venue but mostly sits in the back and yells out inappropriate things. He has published three chapbooks and lives in Lower Mills Dorchester with his partner Emily and a very naughty pug named PJ.

Posted by Chad Parenteau at 7:43 AM 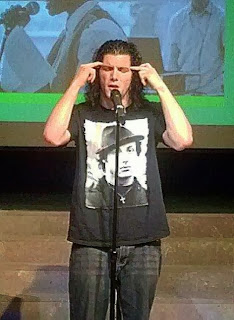 Stone Soup Poetry meets from 8-10 p.m. every Monday at the Out of The Blue Art Gallery at 106 Prospect Street with an open mike sign-up at 7:30 p.m. On December 9th, we welcome Glen Lucci Furman, aka L.U.C.C.I. to Stone Soup's podium for his first feature at the venue.

L.U.C.C.I. (which stands for Listening, Understanding, Caring, Considering, Inquiring) is a poet, an actor and aspiring comedian who enjoys being creative while making positive change and entertaining in the process.  He has lived in Southwest Detroit Michigan, Tennessee, Georgia and now Boston.

He has featured in such places as Boston Talent Showcase, Wierdstock 2011, The 2nd Annual Haught Pink Breast Cancer Fashion Show, Writer's Block, and also had a role in the independent film Supa Dupa.

Upcoming projects include a lead role in the  upcoming film Scavengers and an upcoming poetry CD entitled My Name Is L.U.C.C.I.

Posted by Chad Parenteau at 7:32 AM