A list of future features as Stone Soup winds down for the year.

December 18th: The return of Aldo Tambellini.
Posted by Chad Parenteau at 9:05 PM 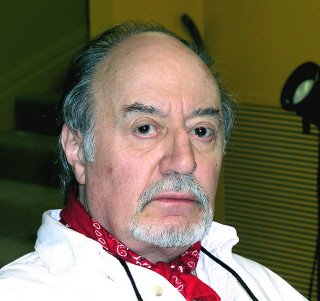 Stone Soup Poetry meets from 8-10 p.m. every Monday at the Out of The Blue Art Gallery (located on 106 Prospect Street in Cambridge) with an open mike sign-up at 7:30 p.m. On December 18, Aldo Tambelllini returns to Out of The Blue and Stone Soup.

Aldo Tambellini was born in Syracuse, New York in 1930, his father from Sao Paolo, Brazil, his mother from Italy. He was taken to Italy at the age of eighteen months where he lived in Lucca (Tuscany). At the age of ten, he was enrolled in the Scuola D'Arte, A. Passaglia. His neighborhood was bombed during WWII; twenty-one of his friends and neighbors died and he miraculously survived. In 1946, Aldo returned to the United States. With a full scholarship at Syracuse University he received a BFA in Painting, '54 and a Teaching Fellowship at the University of Notre Dame, '59, studying with world-renowned sculptor, Ivan Mastrovic.

Aldo moved to New York City, Lower East Side, in the summer of '59. He was the founder of the artistic underground, counter-culture group called 'Group Center" which connected painters, sculptors, poets, photographers, musicians and dancers active outside of the art establishment, organizing alternative ways and non-traditional presentation of the artists work to the public. They engaged in social-political activities. In 1965, he began painting directly on film beginning his "Black Film Series" of which, "Black TV," (made using both film and video) was the winner of the International Grand Prix, Oberhausen Film Festival, 1969 and is in the Museum of Modern Art Collection.

He pioneered in the video art movement in the late 60's and his first video was broadcast on ABC TV News NY in '67. With Otto Piene, Aldo created "Black Gate Cologne," the first national TV broadcast by artists in Cologne Germany, in '68. Aldo was part of the first broadcast by artists, "Medium is the Medium," on WBGH, Boston, MA. In '69. For his media work, he received several grants from the NY State Council for the Arts and exhibited extensively in the United States, Europe, Brazil and Japan. He participated in the Sao Paolo Biennale in Brazil in '83.

From 1976 to 1984, Aldo was a Fellow at the Center for Advanced Visual Studies at the Massachusetts Institute of Technology. As a Fellow at CAVS he conducted workshops and organized with "communicationsphere" as series of international interactive Media Communication Projects. Although Aldo was involved in writing poetry most of his life, since '84, he has concentrated on writing and performing his poetry with music, video projection, and has participated in many radio shows and countless poetry venues. He ran his own venue called "The People's Poetry" in Cambridge, MA. He has been published in journals, magazines and several anthologies. His poems have been translated into Italian, Sicilian and Russian. Most recently, his visual poems have been exhibited in Berlin, Germany at the No! ART Show and at the Altered Esthetics Gallery, in the Guerilla Art Exhibit, in Minnisota. He is a founding member of "Poets Against the Killing Fields<" an anti-war group of political and social poets in Massachusetts. He has produced his first digital film, "Listen" which incorporates his anti-war and political poetry, animation/video and film clips. This film premiered at the HOWL Festival in 2004 in New York City. And won First Place in the Short Experimental Film by an Independent Filmmaker category at the at the New England Film Festival in October 2005 and the Syracuse International Film Festival in 2006. The film has been chosen to be screened in several film festivals throughout the United States and Europe. The digital triptych,-1 (Minus One) was presented at the 2005 HOWL Festival in New York City and includes pieces of Aldo's early video work, poetry and digital images.

Click here for a sampling of the author's work.
Posted by Chad Parenteau at 8:20 PM

Stone Soup Poetry meets from 8-10 p.m. every Monday at the Out of The Blue Art Gallery (located on 106 Prospect Street in Cambridge) with an open mike sign-up at 7:30 p.m. On December 11th, Enzo Surin returns to familiar ground to promote his new chapbook from Finishing Line Press, Higher Ground.

Enzo Surin, born in Petion-ville, Haiti in 1977, migrated to Queens, New York in 1986 where he spent most of his youth. A graduate of Framingham State College in Framingham, MA with a Bachelor’s degree in Psychology, he has counseled college students, presented on diversity related topics, conflict mediation and health and wellness. A recipient of a Salem State Poetry Seminarscholarship, Enzo’s poems have appeared in The Caribbean Writer, Soundings East, Pine Island Journal of New England Poetry, Red River Review, Firefly Magazine, Poetry Magazine, among other literary journals. He is a member of the Virginia Writer’s Club and currently serves as editor for Joy of Writing, a literary publication for Literacy Volunteers of Charlottesville/Albemarle County in Charlottesville, VA. He founded and served as editor of Introspection, a former Wentworth Institute of Technology literary newsletter. Enzo has participated in poetry readings inNew Jersey, Chicago, New York, and Massachusetts and is a regular reader at the Out of the Blue Art Gallery in Cambridge, MA. He currently resides in Boston, MA, where he works for Bunker Hill Community College Library and looks to continue his involvement with literacy efforts.

Photo and bio from author's website, which can be visited by clicking here. A sample poem follows.

night canvas is serene, absent of patrol,
void of the undercover vignettes that swing
through these tenements in search of rock cubes—
the national symbol of withered urbanites.

old-laced Converses perform a high wire act
on the avenue, an anthology's written in their fade.
laughter on the corner vibrates like the bass in a drum.
outside Papi's Bodega, a chromed-wheel Escalade

multiplies the ghost of Tupac Shakur from its speakers:
I wonder if heaven's got a ghetto.
the night drowns in a native glare, suffocating
this thug air, and lays down bereft of memories.

inside, young black order chase arcade mortality
with quarters. any landscape is better than the one here.
each step taken toward higher ground feels cold and lonely—
we inherit this grief each day we step into the a.m.

these blacks faces with razor smiles
are my brothers and my sisters;
crowd of trees forms the pillars behind them,
cracked concrete forms the foundation.

stones on the side of roads filled with weed
and old tires, broke down hearts and old hymns,
have been resting for decadent years; laid to rest
for reasons that still forge through this hood:
segregation, thuglife, mismanagement of love....

their residue linking old-school and new generational heroes:
the rapper, the ball-player, the comedian—no longer
the granddads, the grandmamma, the preachers—their spirituals
lost in this modern urban parable.

we wonder why our children face the day malnourished,
when no new heroes tell them to stay away from the river;
no one tells them it is not the Nile—it is manmade on this side,
it is a battered woman, birthing dead fish from her womb.

the sidewalk
folds
into the man
who staggered in a hooded sweatshirt,
pant leg in blood, pale as I've ever seen
dark skin, eyes loaded ready to cock-back,
his gaze landing a thickness in my stomach.

but this isn't a movie—

—this is Winthrop and Thorndale
where an elementary school rounds the corner,
where the men in white tee-shirts hem up foot traffic;
their chambers usually loaded, but today
empty as winter flower boxes.

Stone Soup Poetry meets from 8-10 p.m. every Monday at the Out of The Blue Art Gallery (located on 106 Prospect Street in Cambridge) with an open mike sign-up at 7:30 p.m. On December 4th, we welcome Paul Hapenny, who will take time off from his busy schedule to read a selection of his poetry.

The Boston and Nova Scotia based, mixed race, playwright and screenwriter, Paul Hapenny, has had a long and productive career in legitimate theatre and feature films. He’s the screenwriter of more than a dozen screenplays including "Vig" for Lion’s Gate, "The Insider" for Jerry Bruckheimer /Paramount Pictures, "The Untitled Paul Hapenny Project" for WB, "Nest of Vipers" for MGM and more.

His plays including"Vig," "Vignettes of a Masculine Tableau," and "Sacrament" have been produced to great acclaim and have won multiple awards in Canada, the US and Overseas. The Los Angeles Times called "Vig" "one of the best American plays. He’s scheduled to direct his newest play, "March Morning Frost," starring the Stratford Ontario Shakespeare Festival‘s leading man, Victor Talmadge in Los Angeles in the Spring.

Paul has also been a News Reporter for CBC English and Radio Canada French News Services. He covered Canadian politics for La Presse Canadienne/Canadian Press. He’s recently returned to writing poetry. It’s a discipline he hasn’t attempted since his first tentative readings at Stone Soup Poetry more than 25 years ago.

Paul attributes his writing abilities to a fortuitous blend of Native American and Irish ancestors. "All of my ancestors, Celtic and Aboriginal were grounded in a storytelling tradition. No one I knew ever told a joke. It was always a performance piece. And both ethnic groups had the inherent ability to laugh at life’s absurdities. The worse a situation got, the harder they laughed. I hope my work can honor even a fraction of what those two peoples and their cultures passed down to me."

A sample poem follows below.

I look to Gunning Cove
across the bay houses huddled
against wind and wave
wood smoke chimney’s scent
a house, a home, I’ve never known

Stone Soup on the 13th

Look back here later next week for updates and features for the month of December.
Posted by Chad Parenteau at 5:09 PM