Below is an advanced look at the poets performing for Stone Soup's 35th Anniversary. Complete bio pages will appear for all the performers by the end of this week.

May 15th: Joanna Nealon returns as a feature and invites Walter Howard to come along.

Stone Soup Poetry meets from 8-10 p.m. every Monday at the Out of The Blue Art Gallery at 106 Prospect Street with an open mike sign-up at 7:30 p.m. The month long celebration of Stone Soup Poetry continues on May 8th with Marc D. Goldfinger and Linda Larson, two poets connected to the popular Spare Change News and its poetry section.

Marc D. Goldfinger has been published by the Ibbetson Street Press, The Aurorean, Pegasus, The Boston Poet, Clamor magazine, Earth First! and the Crooked River Press among others. He is currently the poetry editor of the Spare Change News, a paper put out for the benefit of homeless people. He is a counselor for people with Substance Use Disorders and some of hiswork has been used to augment courses at theUniversity of Massachusetts in Boston. He is also a member of the Highway Poets, a motorcycle club whose members have been published throughout the world.

Linda Larson was born in 1947. She began writing poetry in elementary school and published in school publications in Evanston, Illinois and at Lawrence University in Appleton, Wisconsin. In 1970 she graduated with a M. A. in the Johns Hopkins Writing Seminars. Influenced by T.S. Eliot, Allen Ginsberg, and Robert Bly she continued to write for publication. At the same time she battled mental illness for over three decades. Her peripatetic lifestyle resulted in the loss of many manuscripts. From 1997 through 2002 Larson was the editor of Spare Change News, a Cambridge-based newspaper that reports on and serves people experiencing homelessness. For the last three years she has been co-leading a recovery group at the Lemuel Shattuck Hospital for people like herself, diagnosed with both mental illness and substance abuse. This is her first poetry reading since the 1970's.

Sample poems are below:

The Wake-Up
for Mary Esther

One bright eye peeks
out at the world, still dark
with the shade of mourning. She
is not sure whether it is

safe to throw off her cover,
come out to dance with
the uncertainty of day.
Life is like that

sometimes, on other days
the sun is blinding through
the Easter window of the room
she now shares with the man

who loves her. He smiles at
the shadows cast by life until
they back off, grins down
the throat of hard-luck

until it coughs up sunlight
and then he kisses
her forehead, says, "It's all
right now, breakfast is ready."

For The Love of Your Bones

The murderous
Ticking of the clock
Wants you to feel
The back of your neck
Gliding upwards
In a glissando
Of absolute elegance. . .
Time impales me
On the tip
Of my senses
As no sunset,
Nor constant star
Ever could. . .
When I die
I'm going to live
On the other side
Of your blue sky eyes. 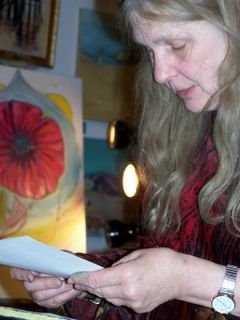 Stone Soup Poetry meets from 8-10 p.m. every Monday at the Out of The Blue Art Gallery at 106 Prospect Street with an open mike sign-up at 7:30 p.m. Monday, May First, is the exact date Stone Soup began as a venue thirty five years ago. Carol Weston, a longtime friend of Stone Soup founder Jack Powers and a Stone Soup Poetry fixture, will read with Nancy Dodson and Valerie Jayne to celebrate the 35th anniversary of Stone Soup Poetry.

Carol Weston's history as a poet is linked to such figures as Jack Powers, John Wieners, Robert Lowell, Allen Ginsburg, and Carl Solomon (to whom Allen Ginsburg's "Howl" was dedicated). Her credentials include being poetry editor of the Impressions Workshop. She was published in the Farleigh Dickinson Journal, alongside Donald Justice, Phillip Levine, and Anne Sexton. She is also the author of “What the Poet Expects of Himself,” an essay published in the Tufts Review. Married to John Galloway, science teacher at Endicott College, she taught for ten years at the Chesnut Hill School.

She read alongside Jack Powers and Allen Ginsberg in 1973 in the former Charles Street Universalist Church. In the Winter of 1983, she was asked by Powers to feature in Boston's City Hall along with John Wieners.

Her poetry credits include The Farleigh Literary Review, Bomb, Stone Soup Anthology 2003, and the anthology dedicated to John Wieners, The Blind See Only This World. Her chapbook, Spirals, Whorls Sutures, Septa, was published by Stone Soup.

Nancy Dodson has read her poem in the prisons and published in the Herald. She’s read her poems at Stone Soup at Out of The Blue and it's previous location at T.T. The Bear's. She has published in Greensboro Music and studed with Ottone Richio at the Boston Center.

Valerie Jayne works in watercolor and ink and has taught art and art history while studying Mandarin Chinese. She’s published poems in the Faculty Community Voice in Mass Bay Community College as well as Stone Soup.

You are the shattered star.
choking on interstellar dust,
you have come through millenniums
crashed by a million
interplanetary bombs.
You leave us a calligraphy
of iron fillings
centered around
your personal magnet
and we are deciphering
those enigmatic stones.

A magnificent performance all for one
Entertainment is intellectual fun!
Perhaps humility-supremacy rolled into Carol
and never are you inadequate in life.
Dear, even with knife sayings you are kind
Blunt sayings are polite-minded
And full wisdom comes forth
with wide-eyed children
In your court
Their egos hold forth
Listen, egos have a right,
Listen, God with you
Carol, you listen!

Jack Powers is currently recovering from an illness, and he will not be able to read tonight. We hope you will be able to make tonight's readings with the remaining features, Margaret Nairn and Murray Denofsky.
Posted by Chad Parenteau at 6:30 PM

Stone Soup Poetry meets from 8-10 p.m. every Monday at the Out of The Blue Art Gallery at 106 Prospect Street with an open mike sign-up at 7:30 p.m. On the 24th, Stone Soup presents the perfect segue from National Poetry Month to Stone Soup's 35th Anniversary celebratory month with Jack Powers featuring, alongside Margaret Nairn and Murray Denofsky. 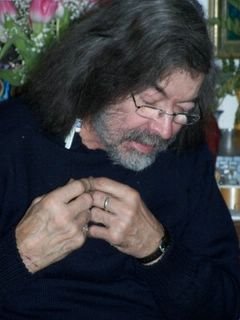 A recipient of the Ibbetson Street and Anne Bradstreet Lifetime Achievement Awards, Jack Powers is the founder of Stone Soup Poetry and the author of a number poetry books, the most recent being The Inacessibility of The Creator from Ibbetson Street Press. His work can also be found in the 2003 anthology from Stone Soup and the City of Poets anthology from Singing Bone Press. Stone Soup poetry has produced over 1,500 consecutive weeks of poetic performances. He has read in Europe, Russia, and the United States. 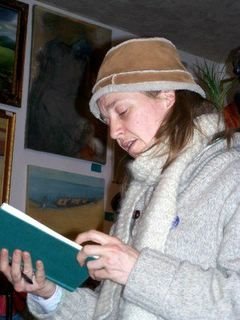 Margaret Nairn is a regular contributor to the Stone Soup Poetry open mike. At work on her first collection of poetry, she is also a curator of the International Community Church in Allston, where the list of featured artists whose works are displayed include Jack Powers. 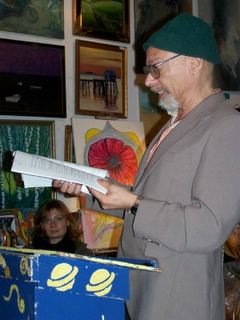 Murray Denofsky was a Woodrow Wilson Fellow in mathematics at MIT in 1965, and has an MA in psychology from Brandeis University. He has written feature articles for the Boston Phoenix, poetry (including 14 translations of Hermann Hesse, two of which were published in the Cumberland Poetry Review in 2004), children's stories, and plays (including the book and lyrics of a musical), several of the latter on the themes of mental illness and/or the sixties era. He also does independent research in mathematics, and in phonetic symbolism, a branch of linguistics, and is Secretary of ASLIP (The Association for the Study of Language in Prehistory).
Posted by Chad Parenteau at 1:12 PM

Stone Soup Poetry meets from 8-10 p.m. every Monday at the Out of The Blue Art Gallery at 106 Prospect Street with an open mike sign-up at 7:30 p.m. On the 17th, we present our larges lineup for National Poetry Month with four excellent local poets, each differing in approach but similar in their drive to produce quality work and share it with an audience. 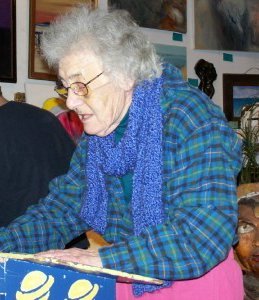 Patricia Fillingham is a celebrated regular at Stone Soup. Through her own imprint, Wart Hog Press, she has published a number of books by herself and others. Her most recent collection of poetry is Existential Blues. 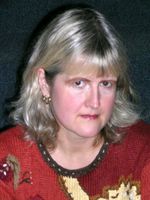 Carolyn Gregory is a longtime member of the Jamaica Pond Poetry Workshop who has published poetry and clasical music criticism widely. She has also read widely, most recently as part of the Poetry In The Chapel series, a recent Hurricane Katrina benefit, and Stone Soup this past September. 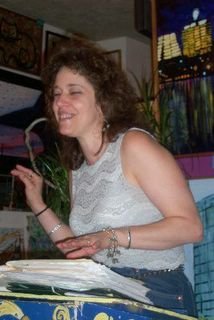 Deborah Priestly is the co-curator of the Out of The blue Gallery, where Stone Soup has been meeting for years. The gallery has been in two locations and is now celebrating its ninth year in existence. In addition to her art work (her work is currenly on display at the gallery and the 1369 Coffee Shop) she is the author of The Woman Has A Voice with Ibbetson Street Press. 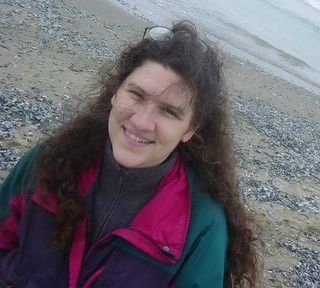 The hostess of the Namless Coffee House series Samantha Jane Scolamiero was a member of the 2004 Boston Cantab Slam Poetry Team attending nationals and has appeared throughout New England and at the Bowery Poetry Club in New York City. She is the author of a book of poetry and photography, The Nameless Collection. Her poem "Last Jazz" has been heard on the radio.

Click here for a sample poem by Carolyn Gregory.

Click here for a sample poem by Deb Priestly.

Samantha Jane Scolamiero's Website.
Posted by Chad Parenteau at 11:27 AM