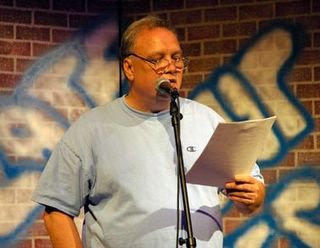 Stone Soup Poetry meets from 8-10 p.m. every Monday at the Out of The Blue Art Gallery at 106 Prospect Street with an open mike sign-up at 7:30 p.m. On March 26th, Stone Soup will see the return of poet, fiction writer, and essayist G. Emil Reutter.

G Emil Reutter is an author/essayist and traveling poet currently hailing from Lower Bucks County Pennsylvania. His poetry, short fiction and essays have been published widely in the small and electronic press. He has presented his poetry at numerous venues in the Mid-Atlantic, Northeast and Southwest areas of the United States.

He has authored several collections to include Life Views (2004/2007), The Jonesville Collection(2004/2006) and Asphalt Road(2004/2006) published by Stone Garden, Stirring Within Poems and Tales From Mount Carmel(2006) published by Blazevox Books and Direction Unknown, a poetry chapbook forthcoming from Moon Printing and Publishing. A number of projects are in submission status.

His poetry/prose/essays have been published widely in the small and electronic press. A sample poem follows.


Shadows in the Daylight

Lurking as a stalker would
Movements invisible to most
Faint, slide and move
From building to building, image to image
Shadows in the daylight abound
Until you see one…not cast from an image
One that may not be a shadow at all 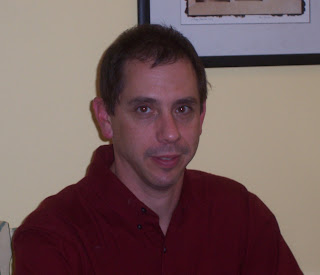 Stone Soup Poetry meets from 8-10 p.m. every Monday at the Out of The Blue Art Gallery at 106 Prospect Street with an open mike sign-up at 7:30 p.m. On March 19th, Stone Soup welcomes Tim Gager back.

Timothy Gager is the author of Short Street and Twenty-SixPack, both collections of short fiction and the e-book, TheDamned Middle. His first book of poetry, The Same Corner of The Bar, is available through Ibbetson Street Press and his most recent, We Needed A Night Out, was released in 2006. He hosts the Dire Literary Series in Cambridge, Massachusetts every month and is the co-founder ofSomerville News Writers Festival.

Timothy is the founding co-editor of The Heat City LiteraryReview and has edited the book, Out of the Blue WritersUnite: A Book of Poetry and Prose from the Out of the BlueArt Gallery.

A graduate of the University of Delaware, Timothy lives inDedham, Massachusetts and is employed as a social worker.

Click here for a sample of Tim Gager's work.
Posted by Chad Parenteau at 10:08 PM 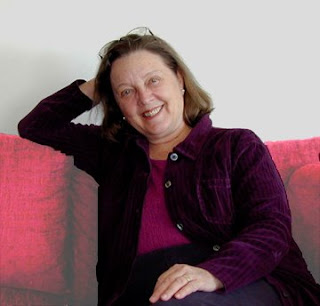 Stone Soup Poetry meets from 8-10 p.m. every Monday at the Out of The Blue Art Gallery at 106 Prospect Street with an open mike sign-up at 7:30 p.m. On March 12th, poet, editor, and poetry host Molly Lynn Watt will be reading a selection from her new release.

Molly Lynn Watt's book of poetry, Shadow People, was released this year from Ibbetson Street Press. Her poems have appeared recently in HILR Review, South Carolina Review, Types and Shadows Review, Friends Journal, Spare Change, The Wilderness Literary Review and other places. Her other recent credits include editing the forthcoming 2006 Bagel Bards Anthology and creating the reading theater "George and Ruth: Songs and Letters of the Spanish Civil War," created and performed with Dan Lynn Watt (available on CD).

We are shadow peoples
talking her by moonlight
desirous of another glimpse
as she rides the mountain ridges.
We’ll wait all night for one caress
from her expanding waves of sheen.
But she’s a neon flirt
who swirls and flares
cavorting through celestial skies—
a good-time girl—
she soars alone.

Stone Soup Poetry meets from 8-10 p.m. every Monday at the Out of The Blue Art Gallery at 106 Prospect Street with an open mike sign-up at 7:30 p.m. On March 6th, friends and Stone Soup regulars Bill Perrault and Red return to feature. 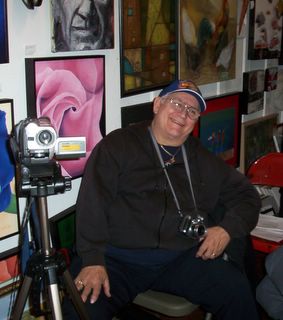 Bill Perrault was born and lived in Biddeford ME until he finished college for which he had paid by working as a weaver in the textilemills. From 1958 to 1960, the U S Army sent him to Germany as a medic andEducational Counselor. He took the opportunity to tour Europe at that time. When his tour of duty was over, he came home and six weeks later,he married his wife, Lorraine. In 1964, the first of their four children was born and, to date, they are now the proud grandparents of seven. After he and Lorraine married, he began his career teaching high school French and Latin in Maine and upper New York State. He did graduate studies at University of Maine and wrote his masters thesis on Guillaume Apollinaire. In 1973, he moved to Massachusetts to work for Polaroid. Bill now lives in Lowell. Throughout his life, he has enjoyed poetry andphotography. Bill was always the one with a notebook with him to write and a camera to take a picture. He never knew when he might be inspired or find a picture that just needed to be taken. In his retirement, the free time allows him to take these passions to a new level. If it’s joining the Poets in Boston for the Stone Soup Poets or producing local TV programs in Cambridge and Lowell, he is enjoying his creative life. Bill Has been published in the Stone Soup Anthology 2003, Out of the BlueWriters Unite Anthology, and his poetry can be seen on various web pages, and if you are lucky enoughto be on his e-mail list, the poetry is Hot Off The Presses! Bill has featured, performed and sometimes hosted at open mikes all over NewEngland--including: COOL COFFEE in Biddeford, ME, Bestseller’s Cafe inMedford, MA his Walden Pond Series and, of course, Out Of the BlueGallery. Bill is a staple figure at the Gallery in Cambridge, MA and has faithfully supported the events they hold there every day/night of the week-- Stone Soup Poets, WordBeat, Open Bark and all. 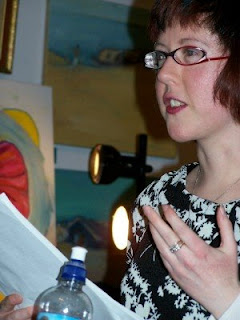 Sue Red is a poetess, short story writer and jewelry maker living in Somerville, Mass. May December is her first and certainly not last book of poetry. Red grew up in northern New Jersey and didn’t start writing until after high school. Shegraduated from Vermont College, Montpelier with a B.A. in poetry andcreative writing. The focus of her thesis was Sylvia Plath’s poetry and how it wasinfluenced by her turbulent relationship with Ted Hughes. The same emotional intensity is visible in Red’s poems. She considers Sylvia a soul who guides her on her journeys, both creative and emotional. Upon moving to the Boston area, she began reading at the open mics at the Out of the Blue art gallery inCambridge. She still frequents that venue as well as others in the New England area. Red’s handmade beaded jewelry is often available at Out of the Blue as well.

Click here for a sample of Bill Perrault's work.

Stone Soup Poetry meets from 8-10 p.m. every Monday at the Out of The Blue Art Gallery (located on 106 Prospect Street in Cambridge) with an open mike sign-up at 7:30 p.m. On February 26th, we welcome local poet and open mike veteran Patrick J. Melvin, who has offered his bio note and sample poem as one and the same:

not much is known about pat,
who surfaced years ago
on the cambridge poetry scene.
here are the rumors.

and he is the offspring
of w.c. fields and marlene dietrich.

one of his poems came in 1st place
in the nacy locke memorial novice award
issued by the poet's roundtable of arkansas.

the difference between pat and a bowl
of peas is that the peas are greener
and possess a higher IQ.

rumor has it that this
is pat's first feature.

he has never played eddie haskell
on "leave it to beaver"
or spoken the phrase,
"nice blouse, mrs. cleavage."

pat learned all his street sense
in the bowery over trashcan fires
with the likes of tom waits
dylan and big bird.

his poetry has appeared
in the haight ashbury literary journal,
mobius, calliope, the pinehurst journal,
social anarchism, as well as other
journals in the small press field.

he is the unholy union of nostradamus
and quasimodo, the prophet
of big bang and mind-zero.

in 2000 pat's poem "enigma"
(about prison violence)
was considered for a pushcart prize
by the editors of halj.

he originally wrote the book-length poem
"the wasteland" and invented
the internet (not al gore),
texas holdem, and gloves
with no fingers

the only difference between pat and
salvador dali (other than the obvious)
is that pat is truly mad.

pat is the reincarnation
of the star-spangled guitar
used by hendrix at woodstock.

Additional information to be added to the site soon.

Stone Soup Poetry meets from 8-10 p.m. every Monday at the Out of The Blue Art Gallery (located on 106 Prospect Street in Cambridge) with an open mike sign-up at 7:30 p.m. On February 19th, Timothy Lagerstedt reads from a collection of one hundred poems published under the title of Bohemian Bongo Poetry, with Suzanne Masciarelli on accompanying percussion.

Bohemian Bongo Poetry is a collection of short stories with varied topics constructed using a verse pair rhyming format. Plot and character composition run wild inside this experiment in creativity conducted on the streets of Boston in an intentionally compressed time capsule.

Tim Lagerstedt is an active business partner in the information venture of TS Productions. Under the pen name of Timothy Carl, TS Productions published its first novel in 2003. A second novel and several children’s books are also in the works. Lagerstedt is a native of Brockton, Massachusetts, where he currently lives. He works full time as an electrical engineer supporting an automated manufacturing operation in South Boston.

Suzanne Masciarelli plays the bongo drums during the presentation aspect of Bohemian Bongo Poetry. Suzanne is an active business partner in the TS Productions operation, personifying the intrinsically creative manifestation captured in all of their products. Born and raised in the metro-west region of Massachusetts, Suzanne relocated to Brockton in the year 2000. She attained her Associates Degree at Massasoit Community College in Brockton and now works full time as an executive administrative assistant in the biomedical business. A sample from the book follows.


Chihuahua’s sandbox stands alone in the corner,
It has become her place of honor.

Trained to piddle just like a cat,
She must see the power in that.

No more trips outside in winter,
Frozen tail despite the sweater.

In the evening when guests abound,
And people gather to expound.

About the virtue of this sacred pet,
Who spared the rug and saves the vet.

Of surgery although not voluntary,
Will assure this dog remains solitary.

Won’t be required because she’s clean,
Although at times a bit obscene.

So turn your back and hold your hat,
Because this dog is going out back.

Posted by Chad Parenteau at 6:30 PM