Performed during month of December.

"Calling for Peace," A Poem by Samantha Jane 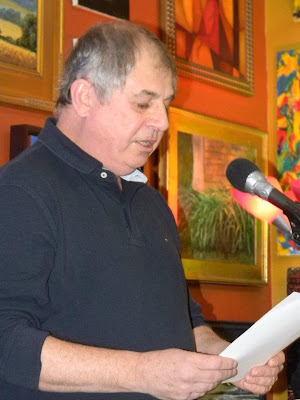 Stone Soup Poetry meets from 8-10 p.m. every Monday at the at the Out of The Blue Art Gallery at 106 Prospect Street with an open mike sign-up at 7:30 p.m. On January 9th, we enjoy a full-length feature from poet Dennis Daly.

Dennis Daly was born in Salem Massachusetts. He graduated from Boston College with a B.S. degree and earned a Master of Arts degree at Northeastern University. At Northeastern he studied poetry under Samuel French Morse.

For ten years Dennis worked for the General Electric Company. He became a union activist and was elected into the leadership of the 9000 member Local 201 of the International Union of Electrical Workers. During this period he published and edited The Union Activist and the North Shore Union Leader. He also was the managing editor of the Electrical Union News.

Dennis has been published in numerous magazines and small poetry journals such as The Sou’wester, Lyric, Boston Today Magazine, Soundings East, Tendril, Poetry &, Green House, Lyrical Somerville, and is included with two other poets in a chapbook entitled 10 X 3, published by Northeastern University Press. He also has done a verse translation of Sophocles' Ajax, which will be published in the next issue of Wilderness House Literary Review. He reads his poems regularly at Stone Soup Poetry and the Walnut Street Coffee Cafehttp://www.blogger.com/img/blank.gif in Lynn and is a member of the Bagel Bards.

In addition Dennis has published travel articles and many op-ed pieces in the Salem Evening News. He is currently working on two books of poetry.

Dennis lives in Salem Massachusetts with his wife, Joanne. They have four children.

Visit the poet's blog.
Posted by Chad Parenteau at 1:30 AM

Stone Soup Poetry meets from 8-10 p.m. every Monday at the at the Out of The Blue Art Gallery at 106 Prospect Street with an open mike sign-up at 7:30 p.m. On January 2nd, we kick off the new year the best way possible, juxtaposing the similar styles of two beloved local poets, Christoper Kain and Valerie Loveland. 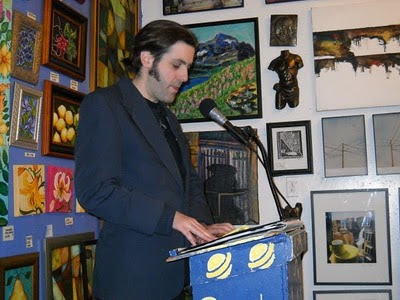 Christopher Kain has been a regular a the Cantab Lounge's open mike for over a decade. He has published two books: homefront, with poems arranged by half hours of the day, and Twentieth Century Limited, with a poem for each year of the twentieth century. He is currently working on a collection called Janus: Looking Forward, Looking Back. 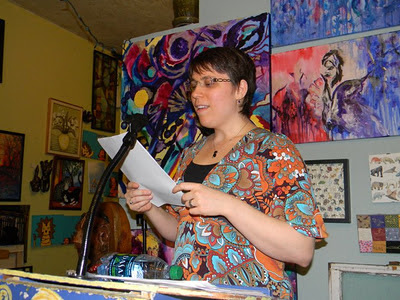 Valerie Loveland is the author of Reanimated, Somehow (Scrambler Books, 2009). Her work is anthologized in Best of the Web 2008, and has been featured at the 2009 Massachusetts Poetry Festival. She is a regular at open mics and writing groups around Boston and Cambridge. She works as an optician and lives in Action, Massachusetts.

Posted by Chad Parenteau at 6:07 PM

Celebrate it with Tom Daley.

Posted by Chad Parenteau at 7:48 PM

Welcome back, Samantha Jane.
Posted by Chad Parenteau at 6:27 PM

Gloria Monaghan features.
Posted by Chad Parenteau at 3:18 AM 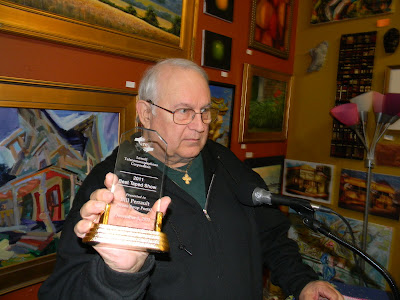 Congratulations to Bill Perrault, who recently won an award from the Lowell Telecommunications Corporation for Best Taped Show of 2011 for his weekly filming of Stone Soup Poetry.
Posted by Chad Parenteau at 1:00 AM 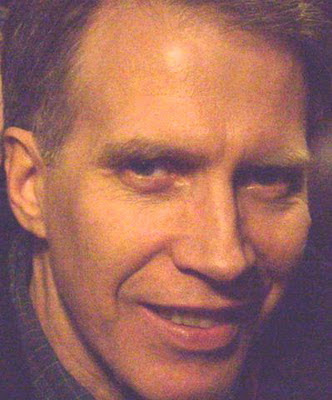 Stone Soup Poetry meets from 8-10 p.m. every Monday at the Out of The Blue Art Gallery at 106 Prospect Street with an open mike sign-up at 7:30 p.m. On December 26th, we close out 2011 with the awaited return of noted poet, playwright and instructor Tom Daley.

Tom Daley is privileged to work with the many fine writers who enroll in workshops he leads at the Online School of Poetry, Boston Center for Adult Education, and Lexington Community Education. He is grateful to editors who have published his work, but won’t bore you with a list of the journal names. He is the author of Every Broom and Bridget, a play about Emily Dickinson and her Irish servants. He worked as a machinist for many moons, and learned skills in that capacity that won him a seat in the Occupy Mount Parnassus Tent Pole Design Committee. He is currently looking for a campsite for a manuscript of his poems in the voice of his mother, House You Cannot Reach.
Posted by Chad Parenteau at 10:01 PM 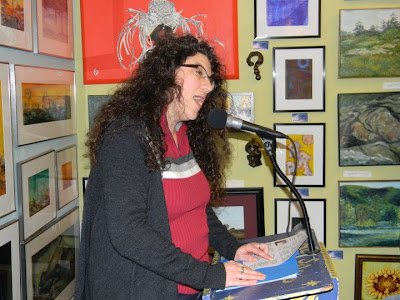 Stone Soup Poetry meets from 8-10 p.m. every Monday at the Out of The Blue Art Gallery at 106 Prospect Street with an open mike sign-up at 7:30 p.m. On December 19th, we welcome back poet, visual artist and local Head-to-Head Haiku host Samantha Jane.

Samantha Jane is a poet-photographer-philosopher-person who lives on the Atlantic coast when she is not sailing. By night she is a performance poet and represented Boston Cantab at the 2004 National Poetry Slam and is a Head to Head Haikuslammaster. By day she is a nonprofit healthcare advocate and organization founder. She has no capital letters after her name to prove she knows anything, but served on the faculty at Harvard Medical School anyway for courses in Cybermedicine. She says “For me poetry is autonomic. It’s essential as breathing. It is a spiritual practice. Respire, Inspire, Live with Spirit. Call me a religious poet.” Samantha counts among her ministers many Cantab and National poets who reach the deep into the heart, especially Jack McCarthy who introduced her to “Slam” at the Isles of Shoals in 2002. She has been poet-in-residence and workshop leader there at the Star Island Natural History Conference for several seasons and is a member of the STAR ARTS colony. She is also an award-winning photographer. Images are just poems without words. She likes to play with the combination. Her poems tell stories that make the mundane germane to even to those who thought they didn't enjoy poetry before. For her poetry is a place to gather large chunks of hope from the roadsides we travel.

Posted by Chad Parenteau at 8:32 PM 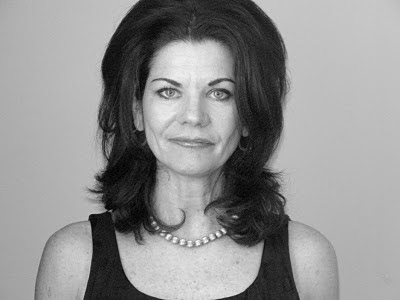 Stone Soup Poetry meets from 8-10 p.m. every Monday at the Out of The Blue Art Gallery at 106 Prospect Street with an open mike sign-up at 7:30 p.m. On December 12th, we welcome Gloria Monaghan, who will be debuting her new poetry collection Flawed from Finishing Line Press.

Gloria Monaghan is an Associate Professor at Wentworth Institute of Technology in Boston. She teaches arts, humanities, and writing. She has been writing poetry since she was a teenager. Her influences include friends (many of them emerging from the Midwest as artists and musicians) and her professors. Her book, Flawed has recently been published by Finishing Line Press. Her work has also appeared in Spoonful, No Roses Review, Ninth Dimension, Slope, and Thirteen. She is working on her third collection of poetry. She also writes fiction and recently published and presented academic papers on music, technology and gender.
Posted by Chad Parenteau at 5:25 PM 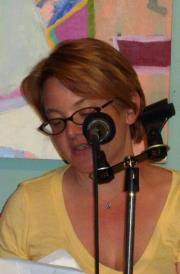 Stone Soup Poetry meets from 8-10 p.m. every Monday at the Out of The Blue Art Gallery at 106 Prospect Street with an open mike sign-up at 7:30 p.m. On December 5th, we welcome another visitor from our neighbors to the west in Connecticut as Helen R. Peterson debuts her new book.

Helen R. Peterson has been published in over 100 online and print journals, both nationally and internationally. Most recently she’s had work accepted at Word Riot, Juked, Existere, and Strong Verse. She was also featured in The Lunch Break Book published by Poet Plant Press, was the editor of the small print journal Chopper, and read at the Bowery Poetry Club in November. Recently she became the Poetry Editor of Waterhouse Review.
A mother of three living in Connecticut, you can find her blog at http://mspetersonexplains.wordpress.com/
Posted by Chad Parenteau at 5:42 PM