May 10: Doug Holder and Zvi A. Sesling Feature 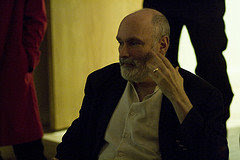 Stone Soup Poetry meets from 8-10 p.m. every Monday at the Out of The Blue Art Gallery at 106 Prospect Street with an open mike sign-up at 7:30 p.m. On May 10, Stone Soup's celebration of its 39th anniversary continues with the return of poet/publishers Doug Holder and Zvi A. Sesling.

Doug Holder is the founder of the Ibbetson Street Press. He is the co-founder of The Somerville News Writers Festival, arts editor of The Somerville news, Director of the Newton Free Library Poetry Series, and Book review editor of The Wilderness House Literary Review. His work has appeared in The Boston Globe, The Toronto Quarterly, Poetry Motel, the new renaissance, The Endicott Review, and many others. He currently teaches writing at Bunker Hill Community College in Boston, Mass and Endicott College in Beverly, Mass. He holds an M.A. in Literature from Harvard University. 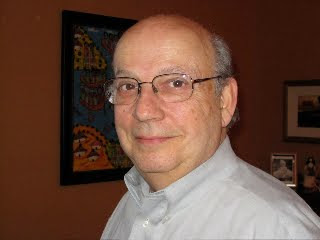 Zvi A. Sesling has published poetry in over 100 magazines among them: Midstream, Poetica, Voices Israel, Saranac Review, New Delta Review, Plainsong, Asphodel, Ibbetson St., Haz Mat Review, Istanbul Literary Review, The Chaffin Journal, Ship of Fools and Chiron Review. He has more poems forthcoming in 2009 in Main Street Rag, Endicott Review and others. He was awarded Third Place (2004) and First Prize (2007) in the Reuben Rose International Poetry Competition and was a finalist in the 2009 Cervena Barva Press Chapbook Contest. In 2008 he was selected to read his poetry at New England/Pen “Discovery” by Boston Poet Laureate Sam Cornish. He recently participated in a Jewish Poetry Festival at Temple Sinai, Brookline, MA. He edits the Muddy River Poetry Review. His book King of the Jungle (Ibbetson St.) was published in March and his chapbook Across Stones of Bad Dream (Cervana Barva) is due out this year.
Posted by Chad Parenteau at 11:03 PM 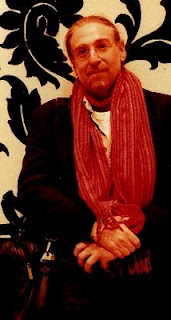 Stone Soup Poetry meets from 8-10 p.m. every Monday at the Out of The Blue Art Gallery at 106 Prospect Street with an open mike sign-up at 7:30 p.m. On May 3, to celebrate Stone Soup's 39th anniversary month, we welcome back C.C. Arshagra, a figure from Stone Soup's past that makes a long-awaited return, promising new work and musical accompaniment.

C.C. Arshagra is a Boston based poet and songwriter. He was active in Stone Soup as the videographer for the Stone Soup Poetry TV show. He also toured with the Barnum and Buddah Poetry Circus. He is the author of The Open Mike Poems, a series of chapbooks. He has been called "The hardest working man in poetry" by Jeff Robinson.

Thanks to Janaka Stucky for kicking off our celebration of National Poetry Month.
Posted by Chad Parenteau at 8:00 PM