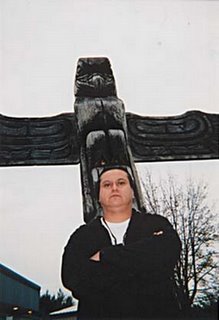 Stone Soup Poetry meets from 8-10 p.m. every Monday at the Out of The Blue Art Gallery (located on 106 Prospect Street in Cambridge) with an open mike sign-up at 7:30 p.m. On November 6th, Stone Soup welcomes poet and activist Luke Warm Water.

Luke Warm Water is an enrolled member of the Oglala Lakota tribe who was born and raised in Rapid City, South Dakota. Luke writes within the context of contemporary American Indians, mostly within urban communities. Many of his poems contain unsafe topics; they have perspectives of racial issues past and present, along with adult themes and content. But his poems also have a sense of hope and a thread of humor, often dark humor.

In 2005, Luke was awarded two artist fellowships for his poetry. Since 2000, Luke has featured at poetry venues throughout the U.S. and in Europe. He also won several Poetry Slams from Oregon to Germany. Recent publication credits include: Drumvoices Revue, Cold Mountain Revue and Red Ink. In 2005 Luke released his latest collection of poems titled On Indian Time along with his animated short film titled Iktomi And The Food Stamp Incident.

Luke is an activist for Indigenous people’s rights, especially in the cause to help free the unjust incarceration of American Indian activist Leonard Peltier. A sample poem follows below.

When the green lizard is gone
while you're on the wrong planet
whom silver and gold are your best friends
where train tracks run behind Safeway
Mills Drug Store and Don Margo's Liquor store
near the viaduct from which that sign
proudly proclaimed
'North Rapid, A Great Place'
circa 1970's Rapid City, SD
Pass out drainage tunnels or
in thickets on abandoned lots
empty Wonder Bread bags
of modern day warrior dreams unfulfilled
Riding my orange Schwinn banana seat bicycle
with the cool black racing stripe fenders
innocence of summer break days
grades take new meaning when
up hill peddling with only one gear
coasting down all too familiar
cracked pavement streets
gravel alleys soaked with black oil
dirt walking paths
keeping my distance
from those unfortunate misplaced
spirited warrior ghosts
my fear stronger than compassion
Maneuvering my bike between
broken wine bottles
pot holes
big rocks
avoiding wipeouts
like a slalom downhill skier
going
for the bronze medal
In turn peddling takes on new meaning
when there are no more food stamps to sell
items stolen or fished out of dumpsters
for Safeway and Mills Drug Store
and a parking lot re-sale
not enough change for a jug
from Don Margo's Liquor store
so go find that hidden in the weeds
spray paint can again
I had witnessed
too many brown faces with
silver and gold stained lips
not yet comprehending at that young age
this could have been my future