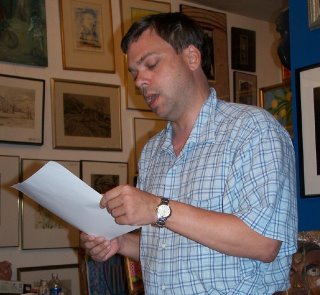 Stone Soup Poetry meets from 8-10 p.m. every Monday at the Out of The Blue Art Gallery (located on 106 Prospect Street in Cambridge) with an open mike sign-up at 7:30 p.m. On November 20th, Gordon Marshall, a regular in Stone Soup's weekly open mike, will have the chance to flex his muscles for an entire thirty minute feature.

This will be Gordon Marshall's first solo reading since Jack Powers featured him at Charlie's Tap in the summer of 1986. Gordon was born in New Haven, CT, in 1963. He has been writing poetry, with some periods of down time, for 25 years, balancing the practice, like most poets, with work and school. He worked for several years in the financial industry, received a degree at UMass Boston, and went back into the financial scene to get an M.A. in English in December 2005.

over a period of twenty years, Gordon has surreptitiously moved from a neo-classical style, to one that may be described as neo-surrealist. His photographic treatments of nature written in metric forms in the '80's have given way to recent prose and free-verse outings, where shots of nature and urban life rub up against spectral memories and deconstructed dreams. Think Cesar Vallegjo growing up in Surburban Boston.

Marshall grew up in surburban Boston (Hingham) on the South Shore. He attended both public and private schools. He liked drawing and music, and studied jazz and classical piano at the South Shore Conservatory in Hingham. He like to ski as a child--enjoying it more an exceling at it-- and he also liked, and continues to like, to sail around the Boston Harbor islands. All these things infuse his poetry.

Marshall's hero is William Wordsworth, and his ambition is to realize Wordsworth's vision of the Philosophic Poem. He works at a bookstore and would like to teach creative writing someday. He lives in Boston's North End. A sample poem follows.

Blow my dreams into dust, dirt darling; tear out my tongue and hang it on a hook. Twist my eyes like tangerines, and tell my dirtiest secrets to your sister. Sleep with me under the stars of soap operas; spill my seed into the stream of your thought. Hang out with me at the club on 52nd Street, where the cool-jazz clarinetist climbs his chords. Pick up a flute and blow blue notes in my ear. I'll buy you a mint julep, a plate of non pareilis and a canape. I'll suck on your straw and steer your hand to the remote on the camel hair couch. Let's watch the fish flow across the flat screen TV. Let's linger in the lava lamp light. Let's walk outside to my walk-up, and wheel through William Shakespeare, or William Wordsworth, or William Blake. For love's sake, take a break from heartache; rake the flakes of flaring from the brakes of shame. Verify the verve of the verse. Clarify the clusters of luster, dust off the must of my soul. Let it roll.