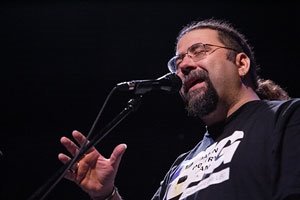 Stone Soup Poetry meets from 8-10 p.m. every Monday at the Out of The Blue Art Gallery (located on 106 Prospect Street in Cambridge) with an open mike sign-up at 7:30 p.m. On November 13th, Stone Soup welcomespoet and venue host Tony Brown back to Stone Soup.

Tony Brown is an award winning published poet and performer whose work straddles the line between page and stage. His work has appeared in journals such as The Furnace Review, The November 3rd Club, Home Planet News; his poems have been anthologized in volumes such as 100 Poets Against the War (Salt Publishing) and In Our Own Words: Poems from Generation X (MPW Books). He has been involved with slam poetry for many years in many capacities, has read and performed his work all over the US, and currently runs a reading series in Providence RI. He also is a columnist at gotpoetry.com. A sample poem--previously unpublished--follows below.

He announces that the poem
he'll be reading is a gift
from the ancient ones
unveiling the dangers of the coming
ultra-fascism.
Then he begins in German
and if he could speak German
at anything more
than a freshman level
we might find
less menace to his voice.
Instead the elementary cadence
marches uninflected
over art into history.
We catch snips of words
and phrases, some in English:
holy war,
Taliban,
Allah,
Jehovah,
Freemasons,
KGB.
We shift in our seats,
startle when he reaches
under his shirt. Nothing
is forthcoming but no one
relaxes. His voice rises
to a near shout. He concludes
with English: "man cannot destroy
the earth, he is of the earth." We
are not comforted, we who are in
this room full of smart people terrified by
a strange man reading a bad poem
in halting German. But when he is done
we applaud, looking around to see
who is applauding, who is not, who sees us
applauding.