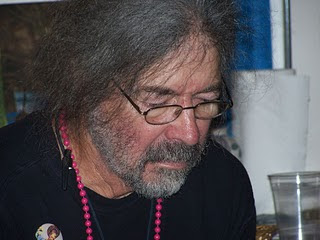 Yesterday Jack Powers died. Jack was the host of the first open mic series I'd ever attended in the late eighties at I time that I hadn't written anything. My girlfriend at the time was a poet and Jack was the leader of the scene. He was an original beat poet, knew or met Ginsberg, Bukowski, Lyn Lifshin and Ferlinghetti to name a few. Basically I was in awe at the command he had at his events but also his acceptance of all poetry. He was the ring leader amongst a large group of Cambridge poets. Nothing ever "sucked", he found value in everything, encouraged the novice (especially if they were women---boy did he have a long list). He'd have his famous friends feature at Stone Soup back when it was held at a few different bars and also feature the local regulars. It was pretty intimidating.

Jack started recognizing me and he read some of my work, quoting some of it back by memory. We became friends the way colleagues or co-workers became friends. I felt validated as a poet to have won his acceptance. We shared beers at reading or should I say, I gave him some of mine.

Jack at home in 1987 ("randomness creates neurosis")There are a lot of Jack Talking videos from the eighties.

Jack basically drank himself to death starting in the 70's. He worked at a church in the North End and brought poetry to people at Nursing Homes in that area. His behavior later became erratic. He went to AA at times and had a strong relationship with God. He had to move to a one room studio. People would avoid him if he drank, embrace him sober. He had two personalities. His brain slowed down in the nineties and he perhaps had Korsakoff's syndrome. At his seventieth birthday party I saw him and he was losing his ability to speak--he could only sqawk out words that were scrambled, difficult to understand in timbre or meaning . He continued to slow , his brain damage more pronounced...not the vibrant man I first met.

A few years ago he lost his ability to speak. He'd show up occasionally to readings flipping through books and asking people to read poems for him.

At this point he stopped recognizing me, maybe he did recognize me but he didn't know me anymore. His last few years he lived in the same Nursing Home he brought his poems and poetry to. Everyone on staff knew him, even though he may have forgotten himself who he was. He had a few strokes in the past months, finally yesterday God took him.﻿