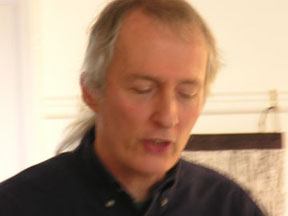 Stone Soup Poetry meets from 8-10 p.m. every Monday at the Out of The Blue Art Gallery at 106 Prospect Street with an open mike sign-up at 7:30 p.m.

Since entering the open mic poetry scene in Cambridge in 1995, Andy Levesque has developed a reputation as a unique and insightful nature poet. He has featured at many poetry venues throughout the area. An update of his 1995 chapbook of poems, "Walden Vision Quest" is in the works, and a new cd of poems, "Wings of Wonder" has just been released.

For six years Andy was host of a live poetry series at Walden Pond in Concord, MA, which he founded in 1997, A graphic designer by trade, he created an online portal for poetry and the visual arts in 2000, now titled MothwingArts.com, where samples of his poetry, photography and digital art can be found, as well as the work of dozens of guest artists and poets. He has designed and published, under the Mothwing Press imprint, a number of books of poetry by outstanding local poets. He is also a composer and musician, performing classic and original material and working on a new music cd.

Posted by Chad Parenteau at 7:06 PM