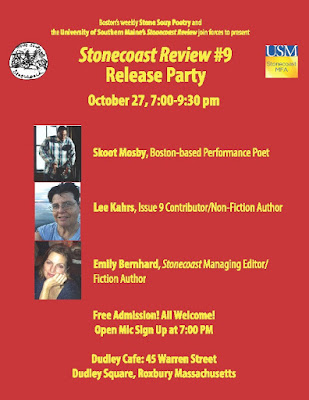 The event will include an open mic hosted by Stone Soup Poetry’s Chad Parenteau and a selection of Stonecoast contributors introduced by Lo Galluccio, poet, memoirist, and former Cambridge Poet Populist who is currently enrolled in the university's MFA program.
Features listed will include Skoot Mosby, a Boston-based performance poet, as well as issue 9 contributor Lee Karhs (creative non-fiction) and Stonecoast Managing Editor Emily Bernhard (fiction).
Admission is free. There will be delicious food available from the Café’s kitchen. The event will go from 7:00 to 9:30 pm. Copies of the Review will be on hand for sale. All are welcome!
The Café is located at 45 Warren Street in Roxbury Center and is easily accessible via numerous buses including the #1 bus in Cambridge.
Skoot Mosby is a heavy hitting poet. As the Poetry Club president and the face of Roxbury Community College, he has created many successful events, such as No Filter, Man vs Police,” and What That Mouth Do. Skoot is taking the poetry world by storm with his freestyle abilities on the mic. Skoot has featured at Rapping With The Writers, Comic Con, Roxbury Rocks, Art is Life Itself, Hope Inc., Verbalization, Lizard Lounge, and Stone Soup. In a major addition to his features, Skoot has been a 3x Semi finalist National Slam Team. Skoot is currently a member of the Compassionate Poets and an assistant facilitator for Writers Without Margins.
Lee Kahrs is the managing editor of The Other Paper, a weekly community newspaper in South Burlington, Vt. with a loyal following and a circulation of 10,400. She is a July 2018graduate of the University of Southern Maine’s Stonecoast MFA program, majoring in creative nonfiction. Lee’s essays have appeared in Idol Talk: Women Writers on the Teenage Infatuations That Changed Their Lives, and the July 2018 issue of The Stonecoast Review. She has completed a collection of essays titled Hair on Fire: Essays From a Life, detailing her life as a 9/11 refugee and her move to domestic life in Vermont. She is also working on a TV show, and a nonfiction book about the dearth of Butch lesbian characters in modern literature, film and television. Lee is currently seeking representation.
Emily Bernhard has written, produced, and directed documentaries that have appeared on National Geographic, PBS, History, NOVA scienceNow!, and American Public Television. She has led documentary expeditions to the Britannic at the bottom of the Aegean Sea, the Lighthouse of Alexandria in the Mediterranean, Loch Ness in Scotland and the Pyramids in Egypt. She has captured intimate moments of life lived with autism and Parkinson’s and recreated a Civil War Siege at Petersburg, Virginia. Her documentaries have won a number of awards including two Cine Golden Eagles, a Science Journalists Award and has won four regional Emmys®. She is currently at work on her first novel and halfway through her MFA program at Stonecoast.
Posted by Chad Parenteau at 10:41 AM