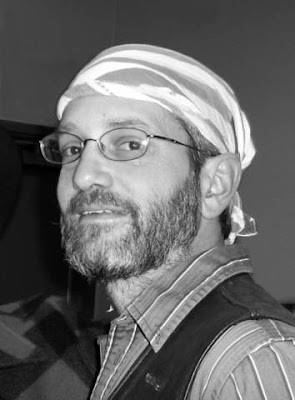 Stone Soup Poetry meets from 8-10 p.m. every Monday at the Out of The Blue Art Gallery at 106 Prospect Street with an open mike sign-up at 7:30 p.m. On April 28th, we have the long awaited return of José Gouveia.

José "Joe" Gouveia is a first-generation Portuguese-American poet & writer who lives on Cape Cod where he is Poetry Curator at the Cultural Center of Cape Cod; author, the Meter Man poetry column for the Barnstable Patriot newspaper in Hyannis; and host of the Poets Corner radio show out of WOMR-FM Provincetown. He has 3 chapbooks published and has edited 3 poetry anthologies, including Rubber Side Down, the biker poet anthology. Gouveia is also a member of Presença, the group of Portuguese-American authors that travels to Lisbon, Portugal every year for the Disquiet Festival. He has won awards for both his written verse and spoken word genres of poetry, including the Cambridge Poetry Awards Poet-of-the-Year 2001. Gouveia is also the Founder of the Biker Poets & Writers Association, former National Secretary of the Highway Poets Motorcycle Club, and a former Cantab Slam Champion 2000 and former Poet Laureate of Cape Cod, 1999. He has an MFA in Poetry from New England College.
Posted by Chad Parenteau at 6:38 AM