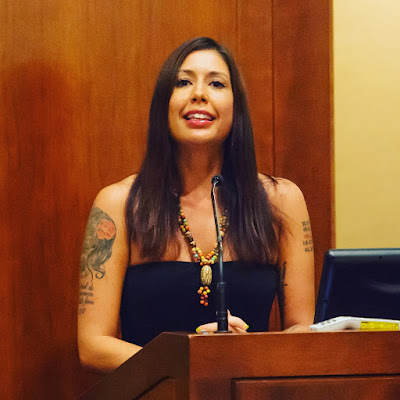 After a short hiatus, Stone Soup Poetry returns as a weekly poetry open mic venue at a new day, time and location. Stone Soup is now meeting every Thursday night from 8-10 PM at Brew on the Grid located on 93 Windsor Street in Cambridge, Massachusetts. We restart our series strong by welcoming Melissa Castillo-Garsow as our first feature in our new era.

It will now be free to attend the open mic and/or feature, but we encourage you to bring cash so we can "pass the hat" for our feature. We also recommend you support Brew on the Grid by at least buying one drink out of gratitude for their hospitality.

Melissa Castillo-Garsow is a Mexican- American writer, poet and postdoctoral fellow at Harvard University's Charles Warren Center for Studies in American History. She is the author of the poetry collection Coatlicue Eats the Apple, editor of the anthology, ¡Manteca!: An Anthology of Afro-Latin@ Poets, co-editor of La Verdad: An International Dialogue on Hip Hop Latinidades and co-author of the novel, Pure Bronx.

Called “the iconoclast we all need” by poet Willie Perdomo and “Fearless” by Latinx Scholar Arnoldo Cruz-Malave, her poetry explores the experience of being Mexican American in New York, gendered traumas of the body and survival in a new borderlands, with a multilingual interplay of linguistic registers.

Her short stories, articles, poetry and essays have been published in numerous collections such as Centering Borders: Explorations in South Asia and Latin America (Worldview, 2017), Afro-Latinos in Movement: Critical Approaches to Blackness and Transnationalism in the Americas (Palgrave, 2016), The Routledge Companion to Latino/a Popular Culture (Routledge, 2016); and diverse scholarly and media publications including Border – Lines, Lengua y Literature, Acentos Review, Hispanic Culture Review, El Diario/La Prensa, CNN.com The Bilingual Review, Women's Studies, and Words. Beats. Life: The Global Journal of Hip-Hop Culture, a publication for which she has also served as guest editor ("The Brazil Issue", 2016). Her current book project a “A Mexican State of Mind: New York City and the New Borderlands of Culture" examines the cultural productions of Mexican migrants in New York City within the context of a system of racial capitalism that marginalizes Mexican migrants via an exploitative labor market, criminalizing immigration policy, and racialized systems of surveillance.