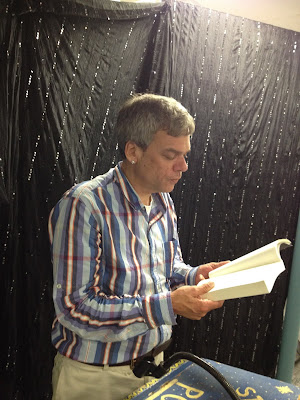 Stone Soup Poetry meets every Monday from 7-9 p.m. every Monday at the Out of The Blue Art Gallery, now at its new location at 541 Massachusetts Avenue in Central Square Cambridge, Massachusetts. On September 19, we welcome back poet, author and founder of the Jack Powers Stone Soup Savor Poetry Prize, Gordon Marshall.


Gordon Marshall has been involved with Stone Soup ever since he was 19, in 1983. He gave his first feature reading at Charlie's Tap, in Central Square, Cambridge, in 1986. Years went by where he wrote no poems, or only a few, and then a spate more; then, in 2006, he reached his mature period, writing poems every day, and he has continued writing regularly since then.

He has published 33 books, with Shires Press, in Manchester Center, Vermont, and he is writing a new one currently, The Stars of the City. Gordon is also a music critic. He has many credits with The New York City Jazz Record, All About Jazz, and The Boston Hassle. He as a music blog, The Flash Boston.
Posted by Chad Parenteau at 8:02 AM