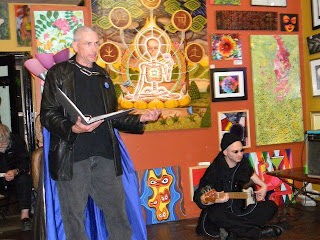 Stone Soup Poetry meets from 8-10 p.m. every Monday at the Out of The Blue Art Gallery at 106 Prospect Street with an open mike sign-up at 7:30 p.m. On March 18th, Stone Soup features the return of Da Butcha 'shoppe.

Da Butcha 'shoppe rose from the ashes of The Collective and became the premier Poetry Performance Troupe of New England with their ongoing production of "The Alien Chronicles," the story of Captain Quawn and his crew stranded on Earth when their spaceship, the Smada Salguod, crashed in the northern Maine woods. The crash was witnessed by an Air Force officer, Major Warren Pease, who now pursues the the extraterrestrial band as they attempt to escape from Earth as well as plot world domination, and human subjugation via a chain of porn stores that sells adult toys that control the mind.

Cpt Quawn speaks in Poetry, while Mj Pease uses the lingo of the military.

Da Butcha 'shoppe, the best thing to happen to Poetry since the invention of the microphone.