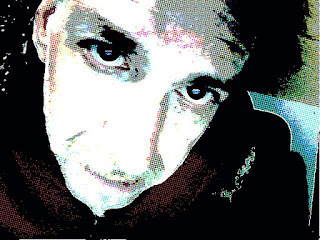 Stone Soup Poetry meets from 8-10 p.m. every Monday at the Out of The Blue Art Gallery at 106 Prospect Street with an open mike sign-up at 7:30 p.m.  This coming Monday, starting at 6:00 PM, we have the pleasure of offering Stone Soup on December 31st, chiming in the new year with poetry and song with the help of feature C.C. Arshagra.  We will also be offering up free food and beverage and invite everyone else to come with post holiday potluck.  Bring your verse and music and whatever else you'd like to ring in the new year with.

C.C. Arshagra: A native of Connecticut who has recently returned after 25 years away from his hometown. 20 years in Boston/Cambridge, MA. Then later moving to the North West, across the Puget Sound from Seattle Washington, to the Native American town of Suquamish, Washington. There, he taught himself to play piano to develop his lyric writer’s life.

CC later moved to Europe for a brief life in Germany, with plans to move to France. But suddenly, he changed directions and returned to CT for a high paying job where he acquired a CDL license.  The job never came to fruition when the recession started.  He hit debt and homelessness, lapped his heels, crawled back, and set-up in home in a low rent humble dwelling he calls his slum-haven (and loves it).

CC is in the process of starting up his publishing company, press22publishing, with a world known author in the wings and a printer paid and set to roll. He is planning to reprint his collections “The Open Mike Poems” as one book.  Other projects include two additional poetry books, a children’s book, and  an experimental poetry project “The ID (Inkless Dialogue) Poems."

C.C. is a dreamer of ‘Humanity will be; Humanity, an ever-present evolving ideal of life living and it’s all gratitude from here.’  His most recent creative behavior has lead him to produce and host a free form radio show at the 6,000 watt radio station WESU, 88.1 FM, in Middletown, CT at Wesleyan University. The show is called “The I Do Not Know Show” With the tag line “The most experimental show in the world now. ‘Now’ in it’s most experimental stage. (What? A person can’t dream?)”
Posted by Chad Parenteau at 9:34 PM