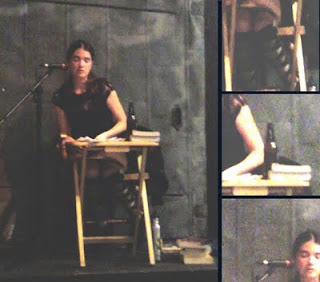 Stone Soup Poetry meets from 8-10 p.m. every Monday at the Out of The Blue Art Gallery at 106 Prospect Street with an open mike sign-up at 7:30 p.m. On August 1st, welcome local poet, journalist and activist Laura Kiesel to her first Stone Soup feature.

Laura Kiesel was born and raised in Brooklyn, New York. She received her B.A. in English (with a double minor in creative writing and journalism) from SUNY New Paltz in 2001, and a Master's in Natural Resources from the University of Vermont in 2009.

Laura started writing poetry at the age of 10, when her much older teenage cousin egged her into a poetry contest between the two of them and the adults in the family declared her the winner. Though she has gone on to write and publish in many other forms and genres, she still considers poetry her first and truest love, as well as her initial instinctual reaction to the world. Laura's articles have appeared in numerous outlets, including Vermont Woman, E Magazine, Earth Island Journal, MotherJones.com, Z Magazine, and SolveClimateNews.com. Her poems have been featured, or are forthcoming, in 12th Planet, Gin Bender, upstreet, Naugatuck River Review, and Amethyst Arsenic.

She presently resides in Somerville and works part-time as a freelance writer and editor and the other half of the time coordinating and instructing writing workshops and environmental programs for kids, teens and adults at various venues in the greater Boston area. She also has a popular blog called "Writing for Survival," which is about "sustainability, social justice, and scraping by as a scribe" at survivalwriter.blogspot.com.
Posted by Chad Parenteau at 9:47 PM