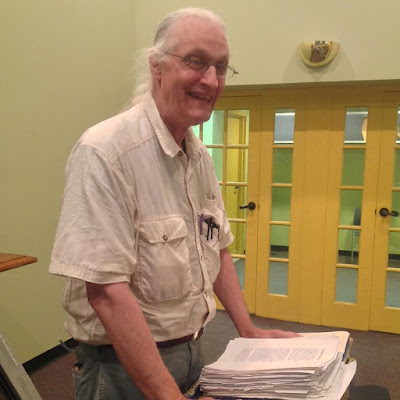 Edit: This has been rescheduled to a later date when we can gather live.

Stone Soup Poetry meets every Wednesday from 6:30 to 8:30 at our new location, the Fort Point Arts Community's Assemblage Gallery, located on 70(a) Sleeper Street, just across from the Barking Crab restaurant (free admission but donations for features are appreciated. On May 27, we conclude our 49th anniversary month with James Van Looy, who will perform Edgar Allen Poe's "A Descent Into The Maelstrom" using his trademark combination of poetry, mime, dance and song.

James Van Looy has been a fixture in Boston’s poetry venues since the 1970s. He performed with the Mirage Mime Theater from 1980 to 1987 during which time he also taught classes offered by Mirage. From 1987 to 1988 he was a member of the Collective Mime.  In the early 2000's, he was one-third to the performance troupe Cosmic Spelunker Theater alongside Ian Thal and Bill Barnum.

His poetry has been anthologized in Stone's Throw, Spoonful, Fresh Broth and Out of the Blue Writers Unite. He has run poetry workshops for Boston area homeless people at Pine Street Inn and St. Francis House since 1992 and regularly reads at Bay State Prison as part of their poetry program. Currently, Van Looy leads the Labyrinth Creative Movement Workshop and is the author of It's All One Thing, a weekly poem column for Oddball Magazine.

Posted by Chad Parenteau at 9:30 AM