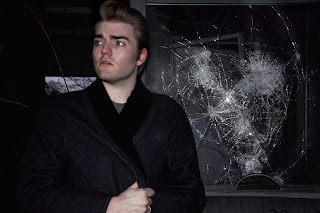 Stone Soup Poetry meets from 8-10 p.m. every Monday at the Out of The Blue Art Gallery at 106 Prospect Street with an open mike sign-up at 7:30 p.m. On  December 10th, Sean Patrick Mulroy features at Stone Soup for the first time.

A gifted writer and an accomplished performer, Sean Patrick Mulroy (aka Sean Patrick Conlon) is a dedicated student of literature and a firm believer in the power of the oral tradition. Born and raised in Southern Virginia, the house where Sean Patrick Mulroy grew up was built in 1801 and was commandeered by the union army during the civil war to serve as a makeshift hospital. As a boy, Sean loved to peel back the carpets to show where the blood from hasty surgeries on wounded soldiers had stained the wooden floorboards. Now he writes poems.

Sean is the author of “The Pornography Diaries,” a poetic study of love and sex as seen through the lens of media study and film analysis. He also stars in a one-man show of the same name, combining original rock music and the poems from the book in a critically acclaimed multimedia tour-de-force.

Sean has performed in 10 countries on 3 continents, participated in 12 national spoken-word competitions, written and recorded 3 albums of music, and sold over a thousand books of his poetry. He has been published in both online and print journals, and has featured at literary festivals for universities and arts organizations all over the World. He is currently living in Seattle, working on the production of a new webseries.
Posted by Chad Parenteau at 3:04 AM