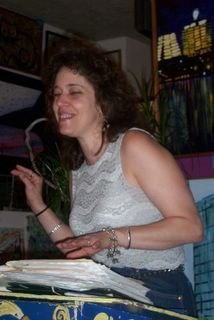 Stone Soup Poetry meets from 8-10 p.m. every Monday at the Out of The Blue Art Gallery (located on 106 Prospect Street in Cambridge) with an open mike sign-up at 7:30 p.m. On October 9th, Deborah Priestly takes time out from one of the busiest schedules in the art and poetry world to read new work and selections from her upcoming book.

Deborah Priestly is a poet and painter from Cambridge. She is co-owner of Out of The Blue Art Gallery, the current home of Stone Soup Poetry. OOTB also serves as the home fo the Open Bark Candlite Series, which she has hosted for over eight years. Her poetry has been published in various venues including Spare Change News, Posey, Ibbetson Street, Manifold, boston Girl Guide, Bay Windows, and the anthologies I Refused to Die and Out of The Blue Writers Unite. She has written four chapbooks and the book The Woman Has a Voice.

Click here for sample poems published on the website The Better Drink.
Posted by Chad Parenteau at 10:21 PM