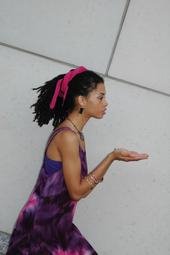 Stone Soup Poetry meets from 8-10 p.m. every Monday at the Out of The Blue Art Gallery (located on 106 Prospect Street in Cambridge) with an open mike sign-up at 7:30 p.m. On October 16th, Radiant Jasmin has her first Stone Soup feature.

Radiant Jasmin is a multi-media visual and performance artist. Her mediums are: dance, jewelry making, painting, singing/songwriting, poetry, and theater. She recently began to weave together her art forms and by doing so has become a stronger creative force. Her art focuses on helping people to love themselves, each other and respect the earth. It is autobiographical at times, deeply reflecting her study of yoga, midwifery and interpersonal relationships. She lives in the metro Boston area where she grew up with her husband and two children. A sample poem follows below.

Freeing My Fear of Death

When I can stare death in the eye and not cry

That is the day that I’ll truly live

To not be afraid of the night or the day

To live each day as if it’s my last

To live neither in the future or past

To present myself with the present

A quantum leap in consciousness is for what I mostly stive

For what’s the use of living my life if I’m afraid to B alive?